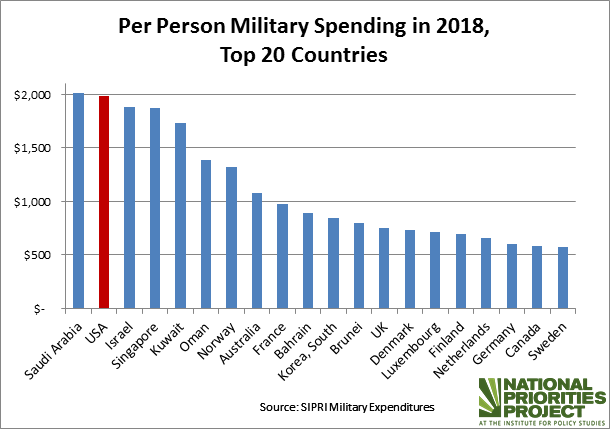 Last week, the Stockholm International Peace Institute released their annual look at world military spending. Once again, the United States is on top. We spent more than one third of the world's total, two and a half times as much as the second coutnry on the list (China), and more than the next seven countries combined.

Of course, the United States is bigger than many countries (although not China), so we also looked at how much each country spends per person. The United States comes in second there, at $1,986 per person, second only to Saudi Arabia at $2,013.

Saudi Arabia is the country we are currently supporting in the human devastation that is the war in Yemen. Our support has continued in spite of the House and Senate both passing bipartisan legislation to end U.S. support for the war in Yemen, because President Trump vetoed that legislation and allowed the U.S. role in Yemen to continue.

Our military spending hurts us because it dominates our federal budget and crowds out spending on education, housing, medical research, environmental protection and more. It's worth remembering that it hurts people around the world so much more, as we support or carry out wars that have resulted in mass starvation and death in Yemen, mass death and instability in Iraq and Afghanistan, and forced displacement, violence and instabiltiy in Syria.

The level of military spending we have now is higher than at the peak of the Vietnam war. Our spending is a direct result of our national policy of being ready to go war anytime, anywhere in the world. And that's just what we're doing.

« Your taxes provided $48 billion to Lockheed Martin. And some other stuff.