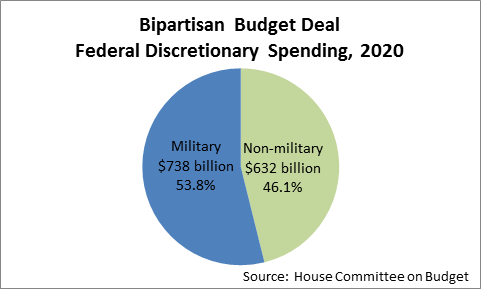 Who says Congress never gets anything done? In July, lawmakers voted along bipartisan lines to pass a budget deal (now also Trump-approved) that will fund the federal government for the next two years, and help the United States avoid a potentially catastrophic default on its debt for the same period. But the deal didn’t come cheap: it came at the price of an astoundingly high, $738 billion military budget.

To put that in context, Democrats crowed that they had provided a larger increase for domestic programs than for military spending – but military spending will still eat up 53 cents out of every budget dollar, with $738 billion for the military and only $632 billion for literally everything else the discretionary budget covers. That means the military gets $738 billion, while education, public health, scientific research, environmental protection, affordable housing, local economic development, veterans’ health, federal courts, the State Department, and more get only $632 billion, combined.

Despite some pretty impressive testimony to this effect, Congress hasn’t yet gotten the message. The bill, which represented a deal negotiated by House Speaker Nancy Pelosi and Treasury Secretary Steve Mnuchin, passed 67-28 in the Senate, with nearly all of the opposition coming from deficit-hawk Republicans, and 284-149 in the House, with only sixteen Democrats opposing it. Of the Democrats that did oppose the deal, most did so as deficit hawks themselves, not because they opposed the dangerous and wasteful military budget.

One exception was Representative Ilhan Omar, whose statement on the deal said, “I cannot in good conscience support a bill that continues to throw billions of dollars at endless wars and Pentagon contractors. In order to pursue peace and prosperity at home, we must not continue to destabilize entire countries, fuel migration crises, and put American troops at risk.”

A $738 billion military budget is too high a price to pay. It’s time we cut the Pentagon budget and reinvested in everything America so desperately needs: good jobs, clean energy, health care and education access for all.

« The U.S. Spends More on Its Military Than 144 Countries Combined