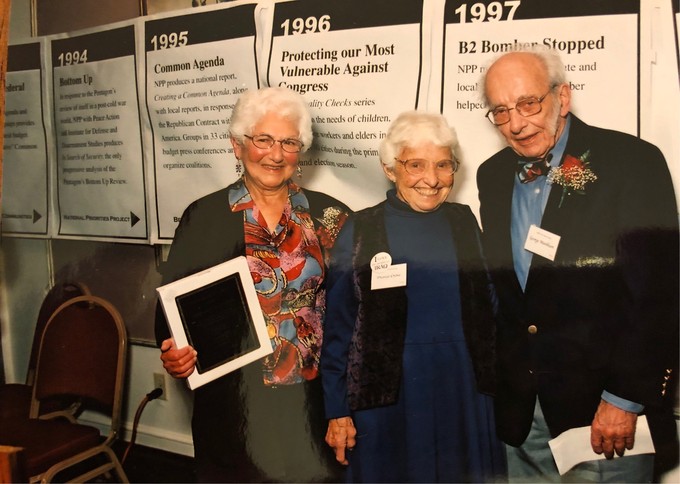 This week, Frances Crowe, the lifelong peace and anti-nuclear activist (among other causes), passed away. She was 100 years old, and she estimated that she’d been arrested for civil disobedience at least 100 times.

Frances devoted her life to ending war. She was still leading protests in her hometown – and ours – of Northampton, MA as recently as this spring.

Frances was larger than life around Northampton and in the history of National Priorities Project. Over more than 35 years, she was an advisor and an inspiration to countless NPP leaders, staff and volunteers. Her vision and energy led NPP founder Greg Speeter to establish the Frances Crowe Award to recognize other intrepid spirits in the struggle for peace and justice.

Because Frances touched so many people so deeply, we asked a few of you to share your memories of Frances. Here are some of your stories:

“I remember the massive files she had in the pre-computer days. And oh, the literature!  A pamphlet for everything. She had such amazing energy which was a trait she shared with Greg. I believe they were often mutual confidants over many, many issues, and the Frances Crow award was a coveted honor. I know Greg was proud of this brain child and took the selection very seriously. When people use the term ‘yours in the struggle,’ I think of them both as warriors for the greater good.”

“I first met Frances shortly after moving to Northampton, in 1997, probably at an AFSC anti-war gathering. I told her I admired her work counseling young men about their draft options during the Vietnam war. Counseling from a woman in Hanover NH much like Frances (wrong – no one was ever quite like Frances) helped me on my path to become a Conscientious Objector. We bonded over that.

Years later it was always an honor to have Frances at NPP’s fall parties, and to be able to present our annual activism award in her name. In 2015 when I had a gathering at my house to announce I was running for Northampton City Council, I was honored to have Frances – a Ward 2 resident – attend. She was the first to ask me a question: ‘What will you do as City Councilor to convert abandoned St. Mary’s church to an arts center in the sanctuary, with a basement hostel for peace activists traveling from one demonstration to another?’ I’ll never forget that – the specificity of her vision, the expectation that her elected representative would deliver.”

“Several years ago I was participating in a civil disobedience action in Springfield with Black Lives Matter. We were blocking a 5-way intersection. I was standing in the road facing a truck that was trying to get through the intersection. The driver was yelling at me and clearly unhappy with me not letting him through. A police officer came over to me and tried to push me out of the way and tell me to move. I looked her in the eye and said, ma'am, I am not going to move, and I turned back to face the driver. I was scared. It was a large truck. And then I felt Frances sitting on my shoulder calming me down and encouraging me to be resolute. The truck turned around and backed away.”

As we celebrate her life and mourn her passing, we know that the best tribute of all is to keep on fighting.