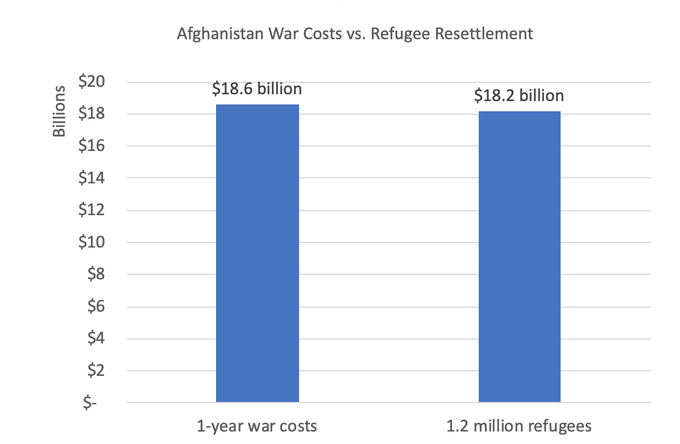 Cost of one year of Pentagon operations in Afghanistan (FY 2020, $18.6 billion) vs. initial costs of resettlement in U.S. for 1.2 million people.

After the breathtakingly fast takeover of Kabul by the Taliban this weekend, lots of commenters have been rightfully concerned with how to protect the Afghan people. From U.S. military interpreters to journalists, members of the disbanded Afghan national government, and displaced women and children, many thousands of Afghans are newly at risk. That's in addition to millions who had already been displaced by the 20-year conflict.

The wrong answer to this is to send the troops back in. The sheer speed of the collapse of the Afghan armed forces is testament to how catastrophically the U.S. occupation and experiment in nation-building failed (and just how wildly Pentagon leaders lied and misled the world about what was going on there).

Instead we need to focus on bringing as many Afghans as possible to safety as refugees.

In 2020, the Pentagon budgeted $18.6 billion for its Afghanistan operations. That level of investment could pay up-front refugee relocation costs of $15,148 for 1.2 million people. That's more than the 250,000 Afghans displaced since the end of May (and growing), and it's a significant chunk of the 3.5 million Afghans who were internally displaced as of July.

We'd face even lower costs to help resettle Afghans in countries closer to home - all the more reason after 20 years of war to step up with some serious resources and get it done. After twenty years, we owe the Afghan people at least that much.