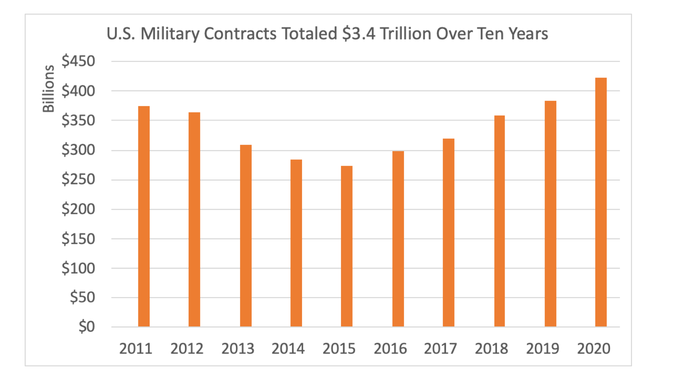 As Democrats negotiate the Build Back Better bill from $3.5 trillion (over ten years) down to $1.75 trillion over ten years, priorities like paid leave, free community college, and Medicare expansion for affordable prescriptions, dental, and vision care are all on the chopping block.

Meanwhile, over the past ten years, the U.S. has handed over $3.4 trillion (or $3.7 trillion in inflation-adjusted terms) to Pentagon contractors without headline-making congressional negotiations. It's part of the larger $7.2 trillion (2021 dollars) that we've handed over to Pentagon contractors almost unquestioned since 9/11. For that money, the U.S. has gotten many copies of a supposedly cutting-edge military plane that has spontaneously caught fire at least three times, has heavily subsidized average CEO pay of $17.7 million at the top military contractors, and allowed corporations to rake in profits even while they failed wildly in the effort to reconstruct Afghanistan.

The spending on contractors continues today at the same rapid clip, accounting for more than half of average Pentagon spending each year. And with Congress poised to approve a $778 billion one-year spending package (that would be around $7.8 trillion over ten years, even without further increases) for the military, the contractors stand to gain again.

So, what was that again about us not being able to afford paid leave, medical care for seniors, and free community college?

« The Hypocrisy of the Federal Spending Debate

Upend This Damaging Narrative About Spending »