NPP Executive Director Doug Hall will present at the Participatory Budgeting Conference taking place in San Francisco on September 25-27 on how to influence the federal budget process. In honor of the power of participation, we bring you a guest post from Tarsi Dunlop, of the Roosevelt Institute, on what participatory budgeting is and why cities should adopt it. 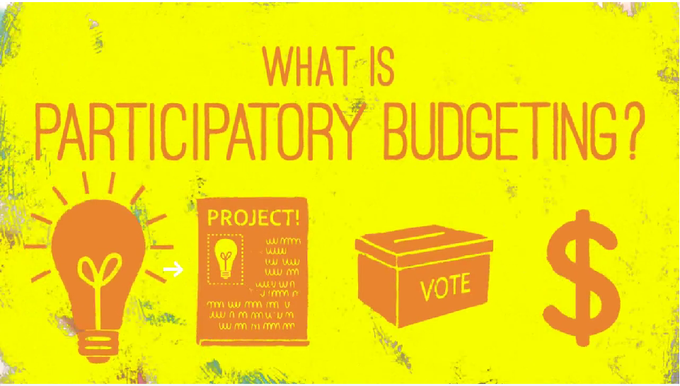 Financial transparency comes in all shapes and sizes. We hear about it in the context of our political system. We want to know who gives money to influence outcomes or gain access, and we want to know who gets money and how they use it. The news frequently focuses on national figures, political campaigns and court cases. But, numbers, budgeting and spending exist on all levels of government; people want to understand how their tax dollars are spent. Participatory budgeting (PB), a concept deeply rooted in the idea of democratic participation, takes financial openness to the next level.

Originally developed in Porto Alegre, Brazil in 1989, there are now over 1500 cities that practice participatory budgeting worldwide. A community-led participatory budget process occurs when: residents brainstorm spending ideas or priorities; volunteer budget delegates develop the actual proposals based on residents’ ideas; residents vote on the proposals; and the government implements the project with the most votes. Citizens who are part of this participatory process become a key part of deciding community priorities, and they gain greater insight and understanding to the challenges and opportunities in local governing.

Without a commitment to wide scale engagement, communities risk decisions being made by an overly narrow slice of the population. Cities across the United States could bring PB to their decision-making processes by building awareness and creating forums for discussion. Cities and communities without the capacity to thoughtfully launch PB programs but that want to start somewhere should put the city budget online and allow citizens to manipulate numbers and figures. This gives better understanding of tax revenue and expenditures - an insider look at the trade offs that communities must make within their limited budgets.

Earlier this year, the White House hosted representatives from across the country to celebrate the innovative practice of participatory budgeting in communities. It’s important to have this national focus, but it’s perhaps more important for local governments to consider the potential this process has to engage their citizens and support the concept of transparency in government.

With increasing levels of distrust in the efficacy of government, Millennials are especially eager to participate in actions where they can represent themselves and see tangible results. A recent report by the Youth Participatory Politics Survey Project, Participatory Politics: New Media and Youth Political Action, found that such activities are an important way for youth to make their voices heard outside of traditional political institutions. In January 2014, the City of Boston launched the nation’s first “Youth Lead the Change” participatory budgeting initiative – an effort that engaged young Bostonians in determining how to spend $1 million of the city’s capital budget.

Millennials support government services, but can also be skeptical of government's ability to solve problems. Given the political gridlock and mainstream narratives that highlight the failures of government, young people are increasingly focused on their local communities and innovative collaborations to solve local issues. The participatory budgeting process offers citizens of all ages, including Millennials, the chance to increase their engagement and solve key issues in their local communities.

State Smart: Federal Aid to Individuals in Your State »