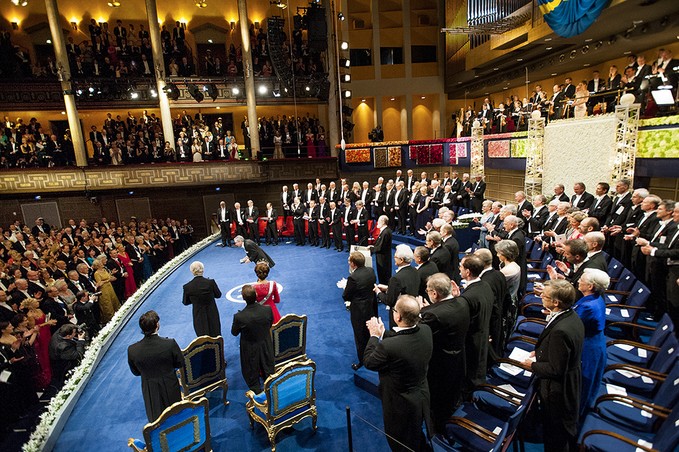 Over the next week, Nobel committees will announce the recipients of winners of all six Nobel prizes. So far, the Prize in Physiology or Medicine and the Prize in Physics have been awarded. Still to come are the much anticipated prizes in literature, chemistry, economics, and – most notably for National Priorities Project – peace.

This year, National Priorities Project was incredibly honored to be nominated for the Nobel Peace Prize, for our "clear and steadfast commitment to re-allocating the enormous sums devoted to the military." We are one of 278 nominees from around the world who have made a significant global contribution in the field of peace. According to Alfred Nobel's will, the Peace Prize is to go to whomever "shall have done the most or the best work for fraternity between nations, for the abolition or reduction of standing armies and for the holding and promotion of peace congresses."

While NPP is extremely proud of the work we have done for decades to highlight and advocate for reduced military spending, we are equally proud to be part of an impressive cohort of nominees for the Nobel Peace Prize this year. We share the honor of nomination with global leaders such as Malala Yousafzai, Edward Snowden, and Pope Francis.

Although NPP does not work internationally, we do examine military spending of by far the largest perpetuator of military force in the world. The United States spends more on its military than the next ten nations combined – and that military might has an undoubtedly global presence.

For over thirty years, NPP has been tracking U.S. military spending and leading a national conversation about how much we invest in war versus other human needs at home and abroad. Most recently, in the face of ramped-up military action against the Islamic State, or ISIS, NPP launched a new by-the-second counter tracking how much American taxpayers have spent to date on “degrading and defeating” ISIS.

As we await the Nobel Peace Prize committee announcement on Friday morning, we are humbled by the international recognition of our work, grateful for the essential contributions that all the nominees have made to global peace, and thankful for the many individuals and organizations we’ve been able to partner with along the way.

No matter what, NPP will continue to shine a light on U.S. military spending and promote federal budget decisions that reflect Americans’ priorities by addressing vital issues for peace and justice such as inequality, unemployment, education, health and the need to build a green economy.