How Much Do We Spend on Our Nation’s Veterans?

Last week news broke that 629 U.S. troops who were deployed in Iraq believe they were exposed to chemical warfare agents while overseas more than a decade ago.

Which begs the question: how much does our nation spend on veterans? Would you be surprised to learn that it's just 4 percent of our nation’s total federal budget in 2014 – about $154 billion? This includes spending on things like veteran’s benefits, hospital and medical care, housing, education, training, and rehabilitation and other benefits and services.

And it’s not because our veterans don’t need resources. With veterans at increased risk for suicide, homelessness, mental health issues like PTSD, disability, and even unemployment, our veterans need and deserve our help.

Spending on the military, on the other hand, accounted for 17 percent of total federal spending, or more than half of all discretionary spending in 2014. Military spending includes the department of defense base budget, nuclear weapons, international security assistance, and Overseas Contingency Operations (OCO) funding, also known as war spending. 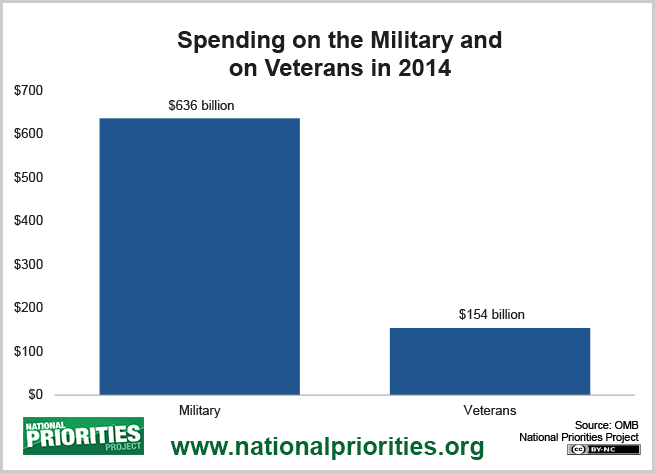 What does it say about our priorities as a nation that for every dollar the U.S. spends on its military this year, it will spend less than 24 cents caring for its veterans?

Got something to say about this or any other issue? Congress returns to Washington, DC on Wednesday of this week to pick up the lame duck session, where they have a full agenda ahead of them. Make sure you weigh in.

What Can We Expect from the Lame Duck Congress? »