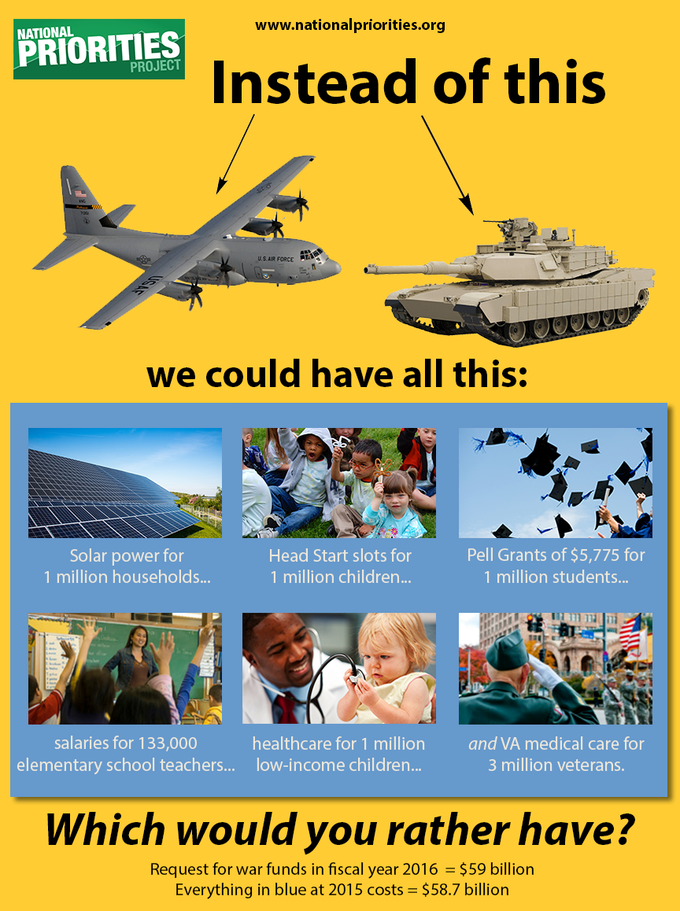 Last year, we set three New Year’s resolutions for Congress in 2015. Yesterday, we took a look at how they did (spoiler: they were about 50/50).

For this year, we’re setting our sights a little higher: a federal budget that works for all Americans. It might take more than one year to get there, but here’s where we need to head in 2016:

In December, Congress passed a budget that continued the tradition of providing the Pentagon with a “slush fund,” ostensibly to fund military operations in Iraq, Afghanistan and now Syria. In 2016, the slush fund will be nearly $59 billion.

Pentagon watchdogs have long recognized that parts of this fund have been diverted to any number of other uses besides war operations, to the tune of at least $108 billion since 2001. And no one knows just how this money is being spent because the Pentagon is not subject to auditing, though every other federal agency is.

Even the Secretary of Defense has argued against the slush fund because its year-to-year nature makes defense planning impossible: “Our military personnel and their families deserve to know their future more than just one year at a time.”

Meanwhile, there’s no education slush fund, no health care slush fund, no highway slush fund. With more than half of discretionary spending already in its corner, it’s time the Pentagon lived within its means.

Let 2016 be the last year of Pentagon slush.

Spending limits were enacted under sequestration because of fears about deficits. In 2010, government stimulus spending and declining tax revenues during the recession led to higher deficits, reaching levels at roughly ten percent of the economy (as measured by GDP). But in recent years, deficits have fallen to a historically ho-hum level, at three percent or less of GDP.

Meanwhile, our country still desperately needs domestic investment. Education spending has remained frozen at two to three percent of the economy for decades, despite the fact that middle class jobs that don’t require higher education are increasingly hard to come by. Our infrastructure is faltering and in need of investment. And the realities of climate change mean that we need new solutions that can both reduce our dependence on fossil fuels and fuel the economy. And so on.

While last year’s budget deal suspended the spending limits known as sequestration for another two years, we have a lot of making up to do for the austerity that has served us so poorly. It’s time for a new round of investment. And that brings us to our next resolution.

Our tax system is as broken as our spending priorities.

Our current system spends as much every year on tax breaks as it does on all discretionary spending combined. We allow U.S. corporations to take their profits overseas and avoid paying taxes on them – forever. We increasingly allow a smaller and smaller share of Americans to hold onto bigger and bigger slices of the pie. And we’ve let corporate taxes wither to the point that they are the lowest share of tax revenues that they’ve been in nearly 80 years of record keeping.

This year we saw major budget victories: the suspension of the debt ceiling, a suspension of sequestration, and a permanent expansion of tax credits for working families. All of those came to pass because of ordinary Americans who put pressure on Congress when it counted. Let’s keep up the pressure.