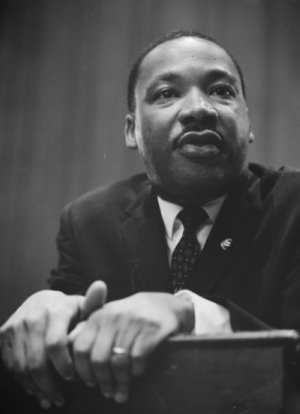 “I refuse to accept the view that mankind is so tragically bound to the starless midnight of racism and war that the bright daybreak of peace and brotherhood can never become a reality.” –Martin Luther King Jr.

Yesterday marked the annual celebration of Dr. Martin Luther King Jr.’s birthday. Many of us remember Dr. King for his tireless works around civil rights, and rightly so: in 1964, he received the Nobel Peace Prize for combating racial inequality through nonviolence.

And while racial inequality was a key pillar, Dr. King’s legacy was also about peace and nonviolence on a larger scale and inequality in every aspect of our society. As we chart a course forward for the upcoming fiscal year and the years ahead, we must bear this legacy in mind.

Our nation’s youngest voters are too young to remember a time when we have not been at war. The wars in Iraq and Afghanistan have cost nearly $1.7 trillion. Meanwhile, new engagements in Syria and Iraq threaten to continue our costly military engagements indefinitely. But this military spending comes at the expense of a necessary investment in domestic priorities.

Our nation is still struggling. The latest jobs numbers shows nearly 8 million people are without work. The latest poverty figures shows 1 in 6 Americans and 1 in 5 kids lived under the poverty line last year. And a recent study showed that it could take more than 25 years to cut that rate in half.

Through investment in successful social spending and tax programs, the federal budget can steer us toward a more prosperous and equal future.  Dr. King refused to believe that there were “insufficient funds in the great vaults of opportunity of this nation,” and so do we.

A federal budget that works for all of us is possible. Let's fight for it this year and every year.

Federal Funds and Primaries in New Hampshire and Iowa »