Competing Visions: Our Budget, Our Priorities 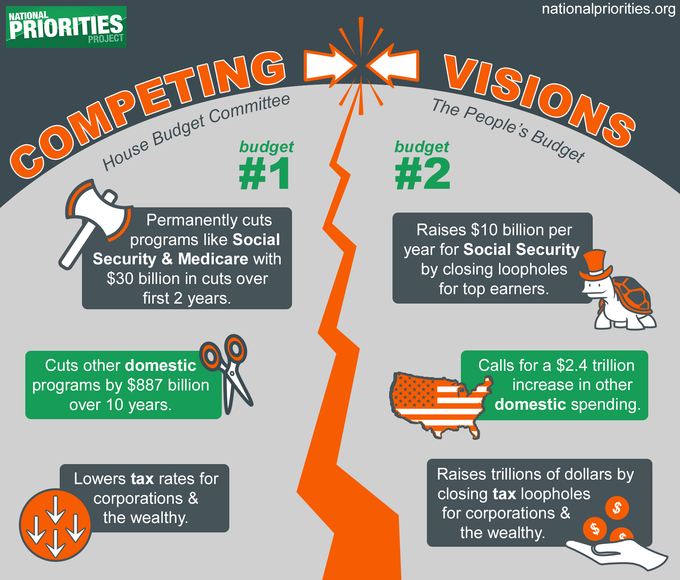 National Priorities Project has just released its annual Competing Visions, analyzing how key proposals for the federal budget stack up to polling that shows what Americans want. And trust us, you’re going to want to see this.

Budgets are all about priorities – and these proposals sure showcase what certain members of Congress have in mind for our collective future. Our analysis shows that there are wildly differing proposals to address our nation’s most troubling problems, such as the availability of jobs and rising income inequality.

One budget, in particular, would make strong investments in our communities, ask corporations and the wealthy to pay their fair share, and end costly and unsustainable wars abroad. Meanwhile, on the other side of the spectrum, another budget proposal would favor domestic spending cuts, increasing Pentagon spending over time, all while lowering tax rates for corporations and the wealthy.

The federal budget should reflect the common values held by the American people. So, which proposal do you envision for our future? One of investment in our nation’s communities? Or one of austerity?

Lawmakers leave town this week for its Easter recess. When they return in April, they will tee up spending and revenue debates, and a vote on some key budget proposals for our nation’s future. While they’re away – we invite you to read over our analysis and see why the Congressional Progressive Caucus budget best matches up to Americans’ priorities. And if you agree, join us in telling your member of Congress know that you support it.

Our lawmakers don’t make these decisions in a vacuum – they have real consequences for us and our communities. Each member of Congress has a vote, and each of them has to decide which budget best serves their constituents and the American public overall. The future of our nation is in lawmakers’ hands – make sure they hear your voice before they decide our fate.

« What’s Going on With the Federal Budget?