If you’re a defense contractor, terrorism means business, and business is good.

According to recent reports, the corporate defense behemoth Lockheed Martin’s revenues rose 15.7% and shares rose 1.5% following the news that President Obama was committing an additional 250 troops in Syria. The report specifically noted “strong demand” for Lockheed’s F-35 fighter jet: a plane that Senate Armed Services Committee Chair John McCain just called a “scandal and a tragedy with respect to cost, schedule and performance.”

Lockheed Martin was the biggest federal contract in 2014, pulling in more than $32 billion in federal contracts in 2014, including $25 billion in Pentagon contracts. Its federal haul makes it practically an honorary state: Lockheed’s Pentagon contracts alone are worth more than the federal government provides in grants to the state governments of North Dakota, South Dakota, New Hampshire, Vermont, Delaware, Wyoming, Montana, Hawaii, Rhode Island, Idaho, and Alaska combined.

The F-35 has never flown a combat mission, despite costing billions of taxpayer dollars every year. And while Lockheed loves to tout its “economic impacts,” Lockheed Martin recently announced plans to lay off 1,000 U.S. workers. With job creation as a top rationale for defense industry largesse by the federal government, those dollars could easily be put to better use.

Lockheed and its defense industry companions have made enough profits from taxpayer dollars. It’s past time to show them that terrorism doesn’t pay. 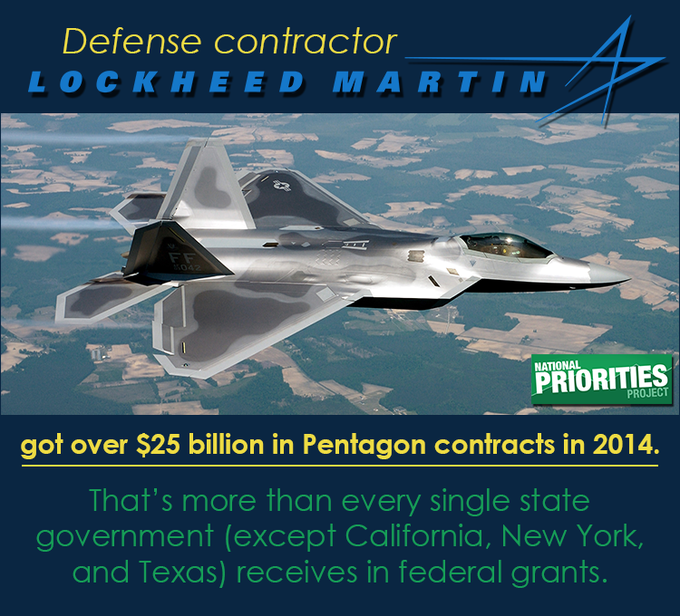 « Senator McCain is Right: No Secrecy for Northrop Grumman on B-21

Pentagon Spending is Out of Control »