Pentagon Spending is Out of Control 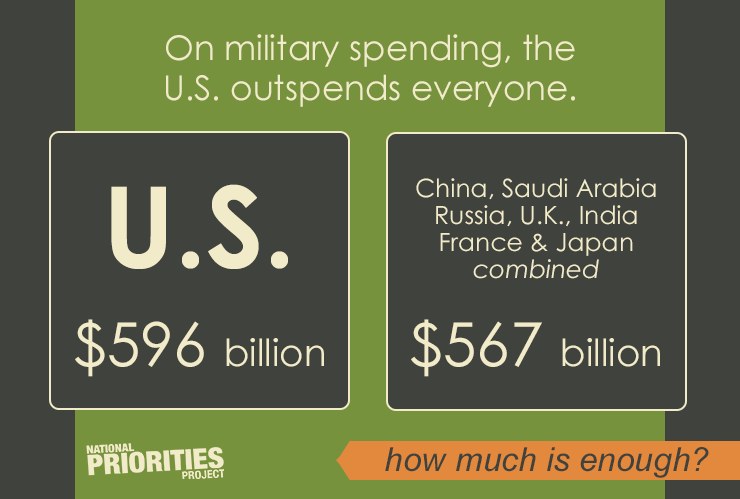 How much money do we need to spend to keep our country safe? Just yesterday, the New York Times published an editorial detailing how the Pentagon budget should be better – not bigger –and we couldn’t agree more.

The $600 billion in 2015 Pentagon spending went towards the Department of Defense base budget, nuclear weapons, international security assistance, war, and related activities. It made up more than half the discretionary budget last year, meaning that all other discretionary programs – funding for clean drinking water, jobs training, infrastructure improvements, federal education programs, and more – were forced to divvy up the rest. Included in the Pentagon’s total 2015 budget was a $64 billion off-the-books slush fund for the Pentagon to spend on whatever it wants. Created ostensibly to fund the wars in Iraq and Afghanistan, the slush fund has been subject to criticism due to incredible mismanagement. A $43 million gas station, anyone?

To add insult to injury, we know that more than half of the Pentagon’s base budget every year goes to bloated military contractors such as Lockheed Martin, Northrop Grumman, Raytheon, and others.  And what do those military contracts pay for? One notable example is one of the Government Accountability Office’s noted risky Pentagon programs – the troubled, behind schedule, and over budget F-35.

We’ve known for a while that the U.S. Pentagon and military has more money than it needs – as the U.S. routinely spends more on its militaries than the next several highest military spenders combined. And in 2015, it outspent the next 7 countries combined – including China, Saudi Arabia, Russia, the UK, India, France, and Japan. U.S. military spending dwarfs the budget of the second highest spender, China. For every dollar China spent on its military last year – the U.S. spent almost $3.

Our spending priorities are completely out of whack – our federal budget shows that we would rather sink billions of dollars into a jet that can’t even fly than fully fund programs that have proven to lift families out of poverty or to ensure kids have a strong start.  The Pentagon doesn't need more money - it needs to spend what it has better.