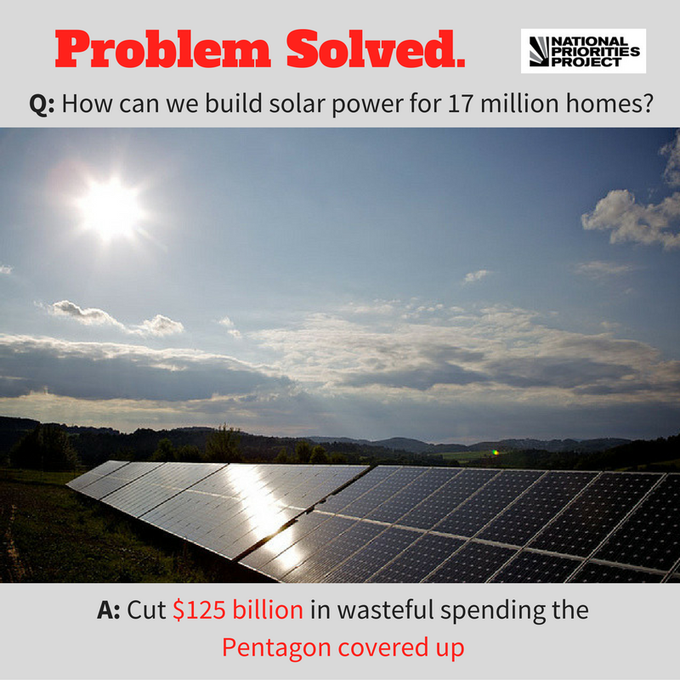 Case in point: if they tell you we can’t afford social programs, affordable college, health care, or clean energy investments, we have some news for you.

A breaking report from the Washington Post revealed that the Pentagon has tried – and now failed – to cover up $125 billion in wasteful spending.

Thanks to the reporting of Craig Whitlock and Bob Woodward – who broke the original Watergate story – we now know that the Pentagon studied its own spending and found that over the course of five years, the Pentagon could cut $125 billion in spending with no negative consequences for national security, or our troops.

On finding out the results of their own study, Pentagon leaders were apparently surprised – and suddenly afraid that Congress might cut the Pentagon’s budget if they found out. Instead of making the findings public and taking the recommended steps to reduce waste, they buried the report.

Now that the findings are public, Congress must take action. The Pentagon should be required to finally pass its first-ever audit – now 25 years overdue – and Congress should force the Pentagon to live within its means.

This $125 billion could make a big difference on any number of issues if it were invested differently: it could create 450,000 infrastructure jobs. Or it could provide health care for 7 million Americans – about 1 in 3 Americans covered under the Affordable Care Act. Or it could be used to generate solar power for 17 million homes – equivalent to every home in California, with money to spare.

We have enough to build a strong future for our country - if we use our resources wisely.

« A Trump Budget: Will Congress repeal Obamacare (aka the Affordable Care Act)?