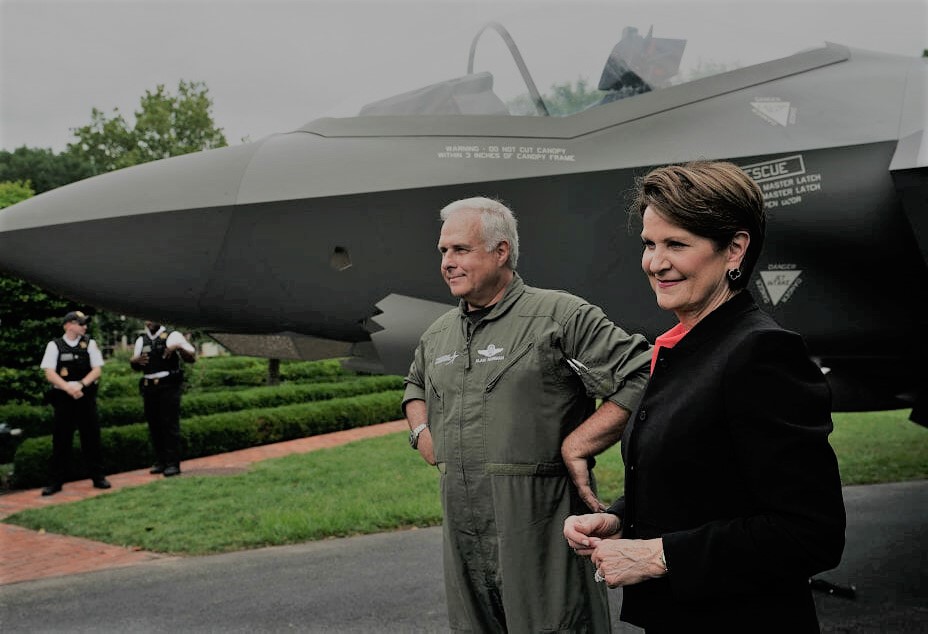 Lockheed Martin CEO Marillyn Hewson in front of an F-35 fighter jet at the White House in 2018. Credit: Getty Images

Military contracting was sold to the American people as a way to reduce the cost of military operations, yet the result has been quite the opposite. Recent research of mine has shown that rather than reduce costs, military contracting — or what I call the “Camo Economy” because it camouflages human and financial costs — has resulted in higher costs to taxpayers. It has also distorted labor markets and contributed to rising inequality, as military contractors earn excessive profits that enable them to pay their employees and particularly their top executives much more than their counterparts in the public sector and most other private sector jobs.

In 2019, $370 billion — more than half of all Department of Defense (DOD) spending — went to contractors. While contracting is sometimes called “privatization,” I think this is an inaccurate description, since military contracting serves a public purpose and uses public funds, while contractors earn profits at the taxpayer’s expense and are often not subject to the competitive pressures of private markets.

Many contractors operate more as monopolies than as competitive firms. Last year, 45 percent of DOD contracts were classified as “non-competitive.” And even among competitive contracts, many of these are “cost-type” contracts, which means that the firm will be reimbursed all its reasonable costs, and therefore has no incentive to reduce costs as competitive, non-monopolistic firms would. Additionally, firms such as Lockheed Martin have created monopolies for themselves by selling weapons systems (like the F-35 fighter aircraft) and other equipment to the DOD that come with “lifetime service agreements” in which only Lockheed can service the equipment.

Military contractors, then, act more as commercial monopolies than as competitive private firms. And using their monopoly powers they are able to earn excessive profits. In 2018, Lockheed Martin Corporation earned $8 billion in profits. About 85 percent of their business was government contracts.

High profits allow military contractors to pay high wages, which contributes to rising inequality. While the average wage across all occupations in the U.S. last year was about $53,000, at Lockheed Martin the average wage was about $115,000, over twice as much. KBR, a contractor that provides various services in the Middle East, had an average wage of $104,000, nearly twice the national average. The CEO of Lockheed earned nearly $2 million in base pay, well above the national average of $193,000 for CEOs; once we include stock options and other compensation, however, Lockheed’s CEO earnings shoot up to over $24 million.

The Camo Economy has made war more politically palatable by camouflaging its various costs. Contractors now outnumber troops in the Central Command (CENTCOM) region that includes Iraq and Afghanistan, 53,000 to 35,000. Deaths of U.S. contractors since September 2001 are approximately 8,000, compared to 7,000 troops. Yet contractors receive neither the public recognition nor the honor of serving abroad, despite the increased risks they face. The Camo Economy is politically useful, as the White House can claim troop reductions while at the same time increasing U.S. presence abroad by relying more heavily on contractors.

The financial costs of military contracting are also opaque. While we know some top-line numbers, we know very few details about where our tax dollars go once they are paid out to contractors. We do know that contracting is more expensive, as contractors have limited incentives to reduce costs and they build profits into their contract agreements. As contractors then use sub-contractors, who also build in profits, there can be multiple layers of guaranteed profits built into a contract between the sub-contractors performing the work and DOD paying the prime contractor. Add in the waste, fraud, and abuse in addition to the excessive profits, and the costs to government quickly balloon.

It will not be easy to reform the Camo Economy. Firms such as Lockheed Martin, Northrop Grumman, and Raytheon each spent about $13 million on lobbying last year. Political connections operate alongside high profits and paychecks to keep the Camo Economy entrenched and growing. But reforms can be made. Reducing the size of the military budget is a vital first step. The National Priorities Project at the Institute for Policy Studies has detailed various ways to do this.

Next, the portion of military spending that is paid to contractors should be reduced and some services should be brought back in-house, including those on and near the battlefield. And third, the contracting process itself should be reformed, so that more contracts are legitimately competitive and create incentives for firms to reduce costs.

Heidi Peltier is Director of “20 Years of War,” a Costs of War initiative based at Boston University’s Pardee Center for the Study of the Longer-Range Future. She is also a board member of the Institute for Policy Studies.