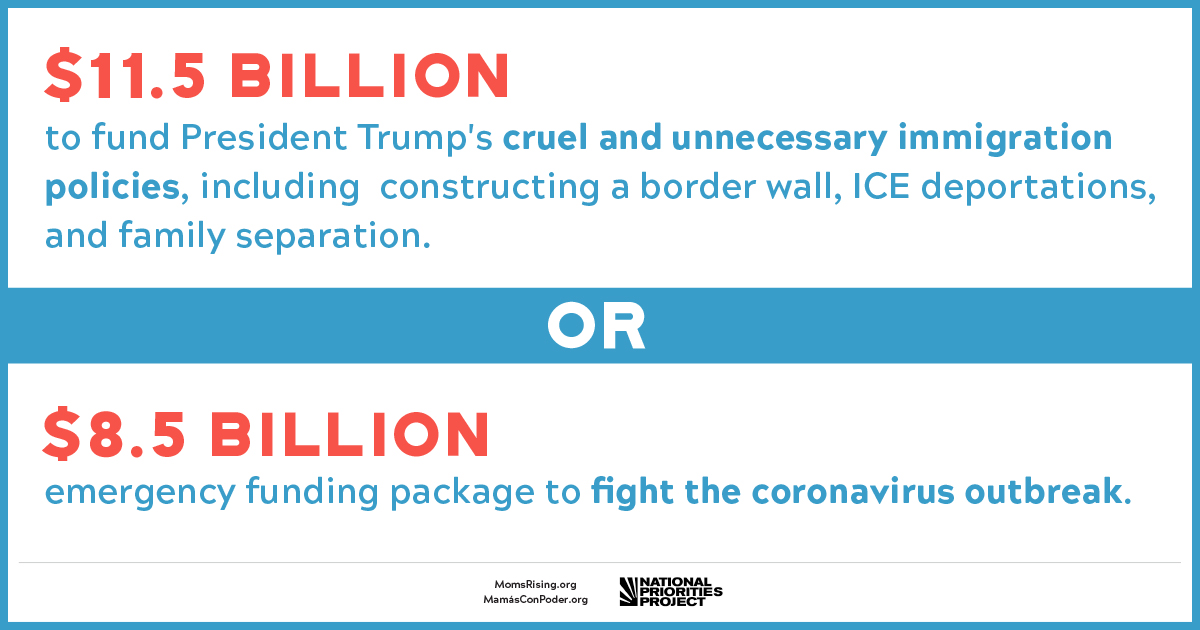 As fears grow of a global coronavirus pandemic, the United States is in a poor situation to cope. Aggressive messaging from the White House assures the public that the "full weight of the U.S. government" is working to keep Americans safe from the disease, but those words are belied by the Trump administration's actual weak support for public health to date.

In 2018, the Trump administration narrowed the epidemiological work of the Centers for Disease Control and Prevention (CDC) from 49 countries to 10, claiming victory over past outbreaks of diseases like Ebola while cutting so much funding that the CDC had to pull back as much as 80 percent of its health security fieldwork to help control future outbreaks.

This month, the president released a new budget request for Fiscal Year 2021 that would slash almost all federal departments, including a 9 percent cut for Health and Human Services ($9.5 billion). The CDC, an agency under Health and Human Services, would be cut almost 16 percent. The Trump budget would cut $3 billion from global health programs, including a 53 percent cut to the World Health Organization and a 75 percent cut to the Pan American Health Organization.

That's not at all the full weight of the U.S. government—it's starving the exact agencies that are our best lines of defense to save lives against domestic and global disease outbreaks.

On Wednesday, Democratic Senate leader Chuck Schumer of New York proposed to drastically increase the president’s $2.5 billion emergency request, to $8.5 billion in new funds to fight the coronavirus outbreak, including $3 billion for the Public Health and Social Emergency Fund, $1.5 billion for the CDC, $1 billion for rapid COVID-19 vaccine development by the National Institutes for Health (NIH), $1 billion for foreign aid through the U.S. Agency for International Development (USAID), and $2 billion for reimbursing states and local governments for efforts they have so far made to prepare for potential cases of the coronavirus. 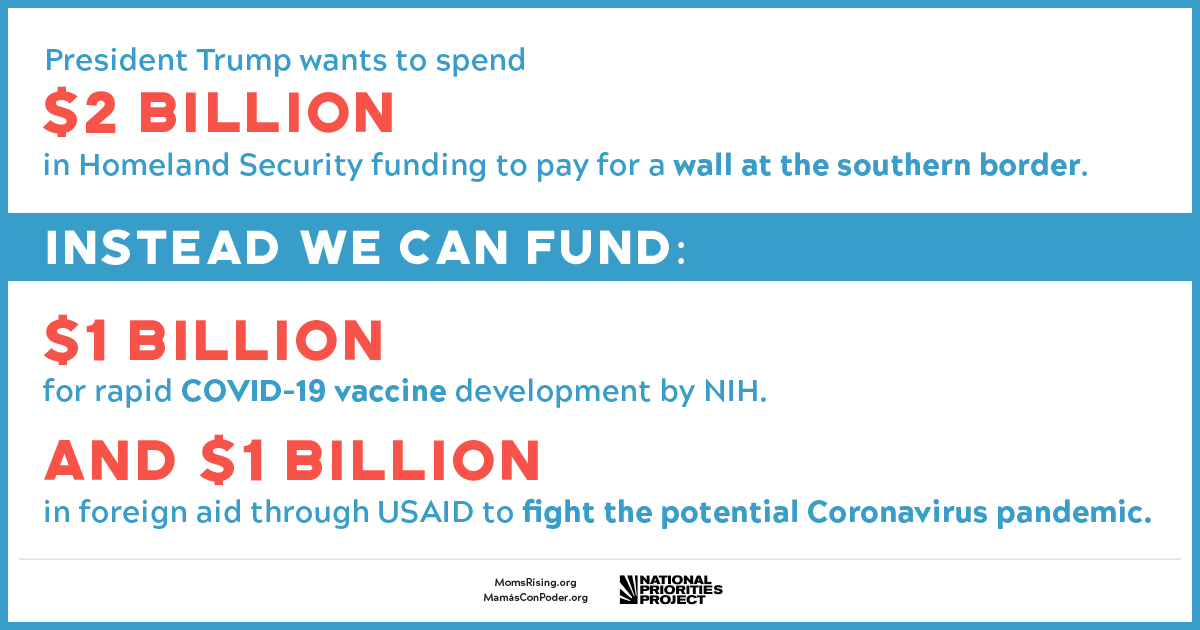 That's a start. But compare that to something that is a major budget priority for the Trump administration: further militarizing the U.S. immigration system by increasing funds for Immigration & Customs Enforcement (ICE) and Customs & Border Protection (CBP) to over $29 billion, up from $23 billion in 2019.

That includes $5.7 billion for ICE detention and removal operations and $5.8 billion for a wall at the southern border with Mexico ($2 billion more in Homeland Security funding than was budgeted for the wall last year). That adds up to at least $11.5 billion of U.S. taxpayer dollars that could be used for anything else other than unnecessary and cruel policies of fear that tear families and communities apart. 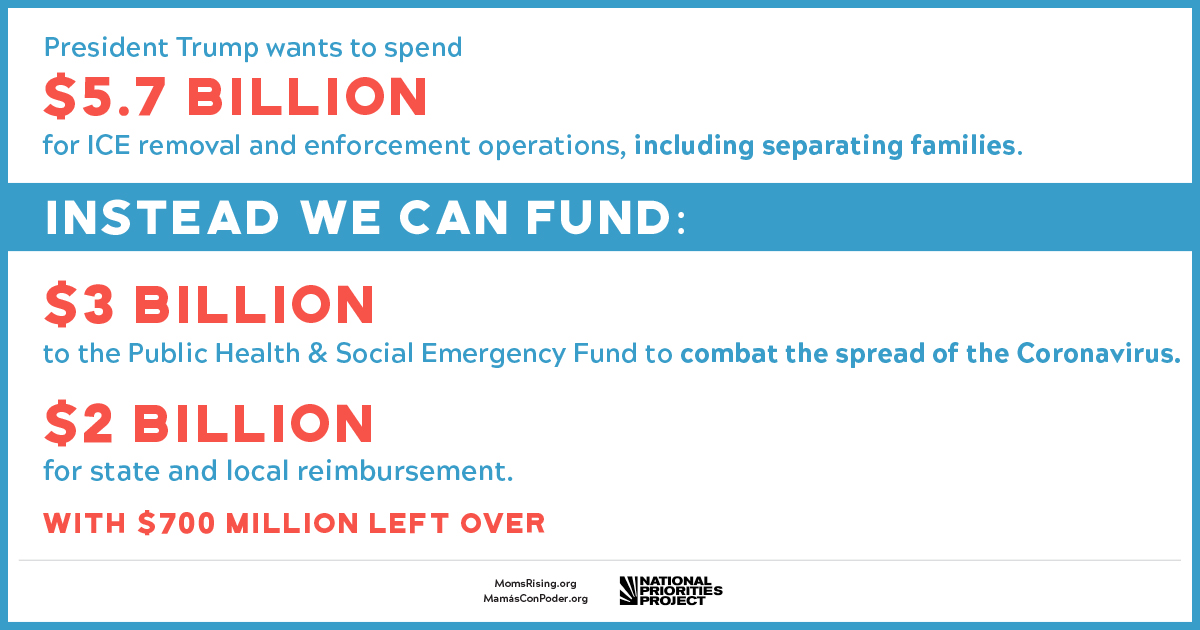 The Trump administration's overall priorities are clear: continuing to increase militarized spending with 55 percent of the 2021 budget request to the Pentagon, and a 22 percent increase in foreign military aid to make armed conflict even more likely. All this at a time when we need more international cooperation than ever against real threats like the climate crisis.

Emergency funds to control the coronavirus outbreak are obviously necessary, but in the longer run we need to think much bigger. The people of this country don't need more militarized spending. We need Medicare for All, so it's no longer prohibitively expensive for millions of uninsured people to see a doctor when they feel sick during a pandemic. We need a Green New Deal, so climate chaos doesn't keep exacerbating the spread of infectious diseases. We need a moral budget, so our government can spend less time reacting to emergencies and more effort building a proactive society of care.

If $1.5 Trillion Exists to Bail Out Wall Street from Coronavirus, We Can Fund Actual Needs for All »