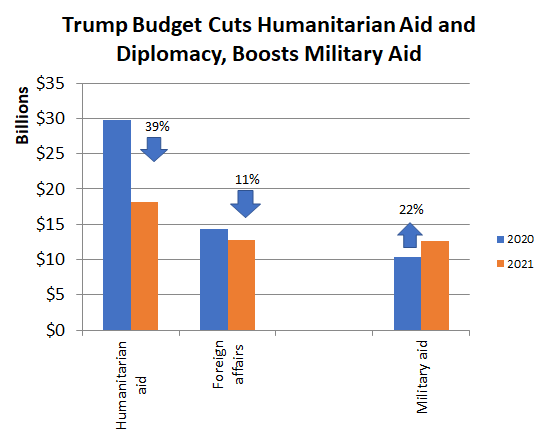 In his 2021 budget proposal released on Monday, President Trump called for increasing military spending while cutting virtually everything else.

This is an astonishingly pro-conflict budget. That may sound overly dramatic, but it's hard to draw any other conclusion from the numbers themselves. Aside from fully funding the forever wars with a $69 billion budget all their own, the President's proposal would cut the already anemic funds for diplomatic efforts by the State Department by 11%, or $1.5 billion, and would cut funds for humanitarian aid by a whopping 39%, or $11.5 billion. Couple that with a $2 billion, 22% increase for foreign military aid, and it starts to seem like the president really thinks every problem has a military solution.

Make no mistake: humanitarian aid is not only humanitarian, it is one of the main tools the U.S. has to help prevent violent conflict from erupting, and is far less costly than going to war. And how does the president expect to reach a new Iran deal, or peace deals with gnarly entities like the Taliban without capable diplomats?

The numbers speak for themselves. This budget is a recipe for war.