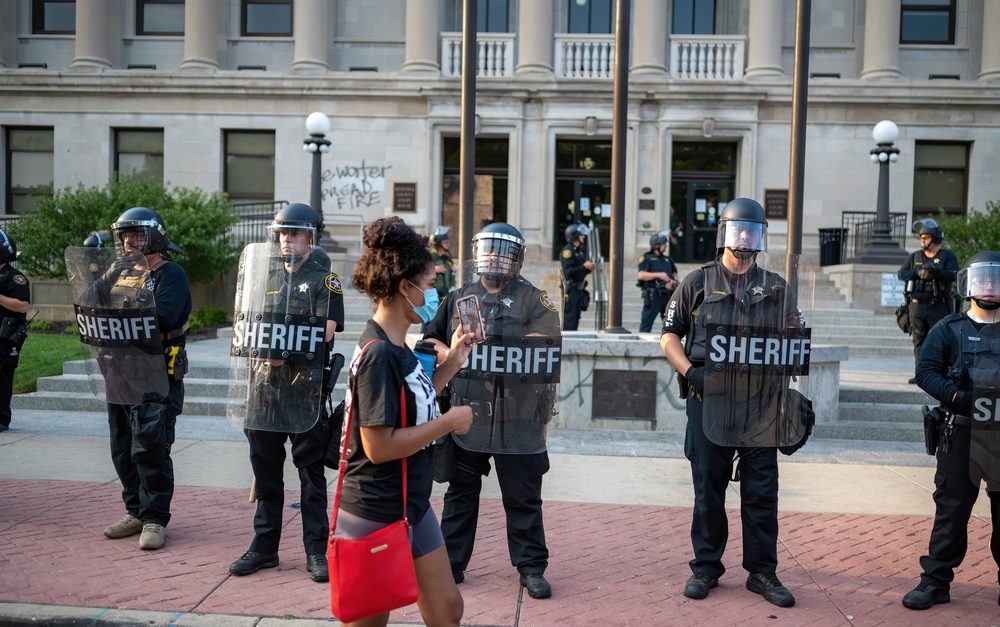 In Kenosha, Wisconsin, police shot Jacob Blake up to seven times in the back in front of his children. When demonstrators protested the shooting, they were greeted by officers in riot gear  and, according to one report, at least one military vehicle.

The frequent police shootings of unarmed Black Americans — and the crackdowns that follow — have driven a movement to defund and demilitarize police departments.

Most of these fights over local tax dollars will play out in states and cities. But a little-known federal program has also come under the microscope.

Many reformers are now calling for the termination of a federal law known as Section 1033, which sends military equipment to police departments free of charge. Under Section 1033, $7.4 billion worth of war machinery has been transferred to local police since the 1990s.

As troops withdrew from Iraq during the Obama administration, the flow of “surplus” military equipment increased. That’s made equipment like MRAP (mine resistant, ambush protected) vehicles available to local police, who have often turned them on demonstrators who protest police brutality.

Winthrop Harbor, Illinois, with under 7,000 residents, received 10 helicopters, a mine-resistant armored vehicle, two Humvees, and other equipment worth over $6.5 million. Officials claim these transfers help with “counterterrorism” operations, but it seems unlikely that Winthrop Harbor has a terrorism problem that requires 10 helicopters to address.

In Kenosha, police have received dozens of military-grade rifles and at least one Huey helicopter.

These transfers also include large gifts to the U.S. Customs and Border Patrol, which according to the Marshall Project received $39 million worth of tactical gear as well as cargo planes, helicopter and bomb robots.

This is no great sacrifice for the Pentagon, which simply buys new equipment whenever the next war begins. But with the U.S. military enjoying a larger budget than the next 10 countries combined, the Defense Department uses Section 1033 to treat this unneeded war equipment as a domestic public investment.

The reality is that we’re sacrificing resources for other priorities — like housing, schools, and hospitals — to buy weapons that kill people at home and abroad.

Instead, let’s adopt the principle of beating swords into ploughshares.

A civilian office could be established to ensure that repurposable military vehicles and equipment are instead made available for civilian, non-police ends (such as disaster response) as part of a permanent reduction in the size of the military.

That should be coupled with bringing defense contracts under public, civilian control. Privatization — and “the military-industrial complex” it fuels — creates a complicated legal architecture that locks in spending and makes oversight difficult.

Defunding police departments — and funding other programs that keep communities safe and address human needs — is necessary, and going forward in many communities. But without federal action to discontinue Section 1033, police departments facing budget crunches could turn to the military as a substitute funder.

The BREATHE Act — legislation drafted by the Movement for Black Lives and introduced by Reps. Rashida Tlaib of Michigan and Ayanna Pressley of Massachusetts — would eliminate Section 1033 entirely. It’s unlikely to become law under the current White House, but the next administration should champion the BREATHE Act.

Meanwhile, local activists should call to prohibit their police departments from participating in the 1033 program and return any military equipment they might’ve obtained.

Repealing Section 1033 would end a major channel of police militarization — and the myth that local residents bear no cost for the instruments of repression in their communities.

Peter Gowan is a policy associate at The Democracy Collaborative.

15 Years After Hurricane Katrina, It's Time to Demilitarize Disaster Relief »