15 Years After Hurricane Katrina, It's Time to Demilitarize Disaster Relief 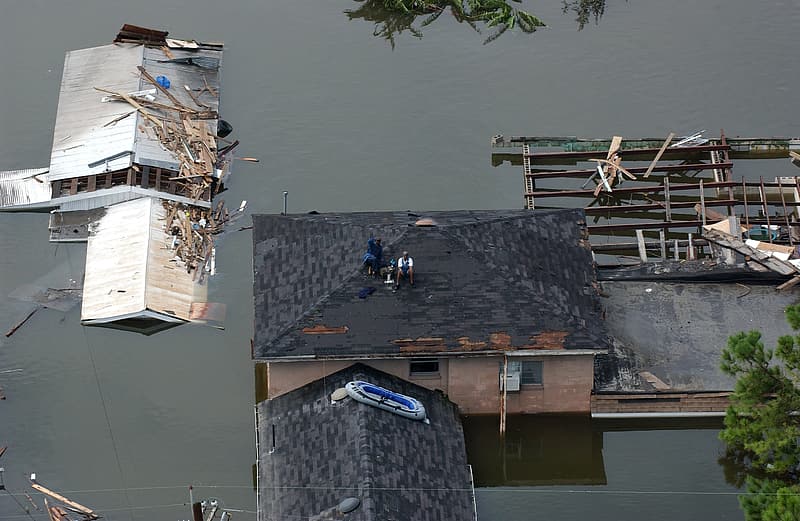 Fifteen years after Hurricane Katrina made landfall on the Gulf Coast, it remains a cautionary tale for how distorted budget priorities can result in militaristic, rather than humanitarian, disaster response.

After broken levees left 80% of New Orleans submerged and tens-of-thousands stranded, news reels fixated on scenes of “looting” and lawlessness. Rich with racist overtones echoed in coverage of Black-led movements today, media narratives described the city as “under siege,” as more of a war zone than a humanitarian crisis. The thinly-coded language depicted the predominantly poor and Black population—struggling to survive one the deadliest storms in U.S. history—as aggressors. Amidst such rhetoric there was another violent reality: white vigilante violence and police brutality that terrorized the stranded population.

And then there were the private contractors. While some were hired by businesses and wealthy individuals to protect property, the notorious private security firm Blackwater arrived in New Orleans 36 hours after the levees broke on a federal contract. As police seized weapons from civilians, heavily armed private security patrolled the city in SUVs and unmarked vehicles.

While Blackwater operators described their mission as “securing neighborhoods,” Louisiana National Guard’s Joint Task Force Commander declared, “This place is going to look like Little Somalia. We’re going to go out and take this city back. This will be a combat operation to get this city under control.” Even community groups offering mutual aid felt treated as threats.

The role of active-duty troops in any domestic disaster is limited under the Posse Comitatus Act, which prohibits use of federal troops in domestic law enforcement. Active-duty troops are frequently called upon to help in a disaster, but they take support roles such as search and rescue. Federal troops assisting in a disaster leave law enforcement to the National Guard troops, who are subject to the dual authority of states and the federal government. As the recent violent repression of Black-led uprisings against police brutality and systemic racism have demonstrated, the massive U.S. military budget adds military might to policing in spite of federal regulations limiting the role of federal troops in law enforcement.

After Hurricane Katrina, President Bush suggested that the role of the military in disasters should be expanded. The spread of the coronavirus pandemic earlier this year renewed calls for the creation of a disaster response command within the military to respond to threats including future pandemics and climate-linked natural disasters. We only need to look as far as Hurricane Laura, which made landfall last week as a Category 5, to recognize that climate change brings stronger storms that put a growing number of people at risk. That’s not to mention the summer of oppressive heat waves and extreme wildfires setting pollution records. Each crisis compounds the next.

And yet—just like the U.S. military is not a public health organization and should not be in charge of a public health crisis, the U.S. military is far from a humanitarian organization and should not manage disaster response. It’s clear that in a climate-changed future, we need more resources to meet the greater-humanitarian needs that more ecological disasters will bring. We can’t meet humanitarian ends with militarized means, but when the only robustly funded agencies are militarized, how can we expect our responses to crises not to be?

For the Pentagon, climate change is yet another security issue requiring more militarism. For defense contractors, its a business opportunity: there’s a lucrative industry that revolves around a militarized, security-led, and for-profit approach to climate adaptation and disaster response.

But there’s another way. Instead of funneling hundreds of billions of dollars each year into militarism, we can invest in the infrastructure of care we need to keep each other safe. Fifteen years after Hurricane Katrina, the need to demilitarize disaster relief is clearer than ever.

Ending the School to Prison Pipeline »