Would the U.S. have COVID under control if we hadn’t overinvested in the Pentagon?

While the United States continues to claim the global leadership position in the number of cases and deaths related to COVID-19, the President’s budget request for FY2021 defyingly demands a historically high level of spending on the military and defense. Out of touch with the difficult realities of American workers and youth that have found themselves with little to no support during a time of need, the upcoming year’s defense budget will represent a $48 billion increase from the FY 2017 budget.

In fact, the $740.5 Billion requested for defense in FY2021 would represent one of the highest military budgets in the history of the United States; only surpassed by the justified spending for WWII and the misguided spending on the Global War on Terror.

Yet, what great wars is the United States fighting today? What imaginary enemies could justify such wasteful spending when 138,000 Americans have died from a very real virus in the span of a few months? 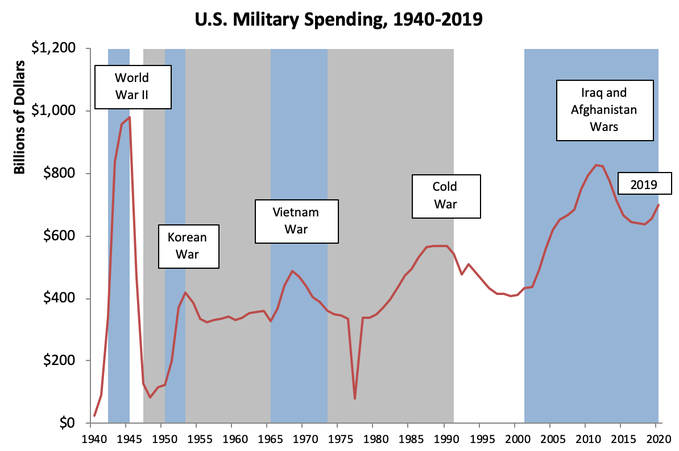 Spending more on its military than the next ten countries combined, most of which are allies that would jump to support the United States, there are simply no real wars left for the United States to fight internationally. What is left, however, is a domestic fight against poverty, sickness, and environmental catastrophe; a fight that the American people need to win if they wish for a more stable and liveable future. COVID-19 has already left millions more of Americans unemployed than did the Great Recession.

As America further lags behind both developing and developed countries in its inability to save the lives of its citizens from the virus, the COVID-19 pandemic has awakened many Americans to the real costs of inadequate social programs combined with morbid income inequality and a for-profit healthcare system.

To quote Senator Bernie Sanders (I-Vt.) in his case for the 10% Pentagon cut amendment: “Now is the time for us to truly focus on what we value as a society and to fundamentally transform our national priorities”.

For a just and sustainable future after the pandemic, it is high time for America to look inwards and invest its billions on its own taxpayers instead of the private contractors that get to enjoy more than half of the defense budget.

While the amendment that Senator Bernie Sanders, Representative Barbara Lee, and Representative Mark Pocanwould  put forward would establish a much-needed $74 billion grant program to create jobs and to provide health care, housing, child care and educational opportunities for some of America’s poorest communities, here are a few of the many ways that these $74 billion could have prevented the unchecked spread of COVID-19 and saved thousands of American lives.

With $74 billion dollars diverted from the military to public health, the federal government could have:

Had the U.S. federal budget appropriated similar funds for public health as it does for the military, these numbers very simply demonstrate how our lived catastrophe could have been averted. However, when COVID-19 hit the United States, the budget for the CDC represented an embarrassing 1.5% of the military’s budget, leaving Americans with the biggest arsenal of weapons on earth, yet still at the mercy of a deadly virus.

It is tragically impossible to revert time to save a hundred thousand people from death, yet it is still possible for all of us to support and help kickstart the transformation of the U.S. federal budget to a just and equitable one.

Houssem Chammam is a Next Leader working with the National Priorities Project at the Institute for Policy Studies.

Ten Better Uses for Ten Percent of the Pentagon Budget »