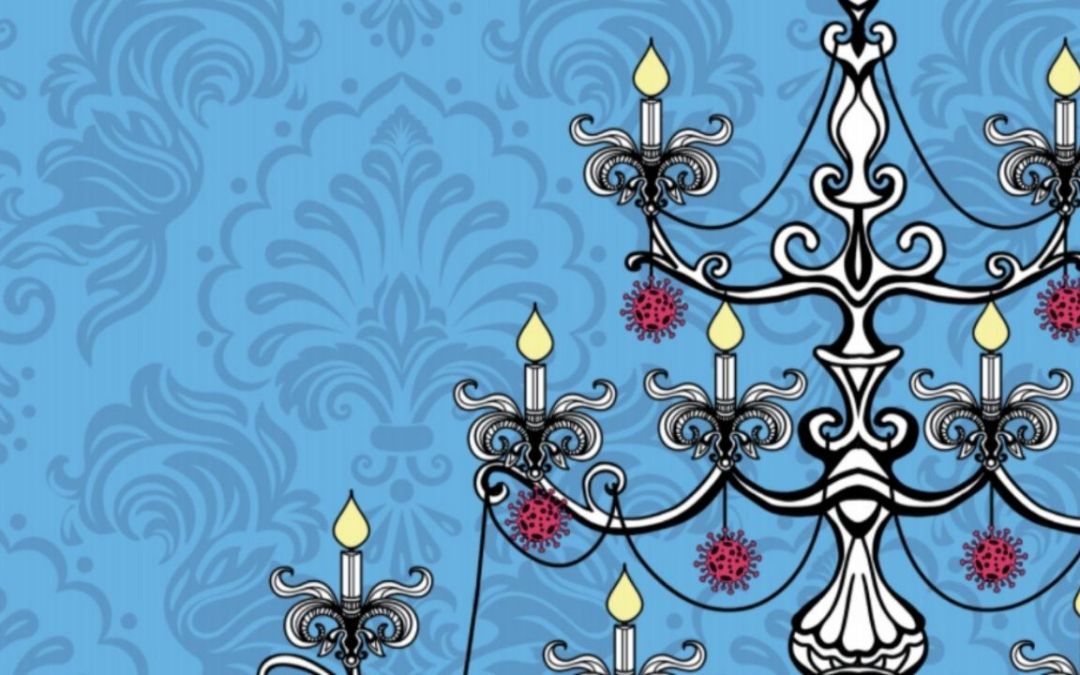 According to a new report  by Americans for Tax Fairness (ATF) and the Institute for Policy Studies (IPS), the collective wealth of America’s 651 billionaires has jumped by over $1 trillion since roughly the beginning of the COVID-19 pandemic to a total of $4 trillion at market close on Monday, December 7, 2020. Combined, just the top 10 billionaires are now worth more than $1 trillion.

Their wealth growth since March is more than the $908 billion in pandemic relief proposed by a bipartisan group of members of Congress, which is likely to be the package that moves forward for a vote in the next week, but has been stalled over Republican concerns that it is too costly.

The total net worth of the nation’s 651 billionaires rose from $2.95 trillion on March 18—the rough start of the pandemic shutdowns—to $4.01 trillion on Dec. 7, a leap of 36%, based on an analysis of Forbes magazines research on billionaires. By around March 18 most federal and state economic restrictions in response to the virus were in place.

Forbes’ annual global billionaires report was published March 18, and ATF and IPS collected the real-time data on Dec. 7 from the Forbes website. The methodology of this analysis has been favorably reviewed by PolitiFact. The ATF-IPS analysis also looks at wealth growth since February 2019—the date of Forbes’ immediately previous annual billionaires report published well before the start of the pandemic and resulting market gyrations.

The $1 trillion wealth gain by 651 U.S. billionaires since mid-March is:

At $4 trillion the total wealth of all U.S. billionaires today is nearly double the $2.1 trillion in total wealth held by the bottom half of the population, or 165 million Americans.

“Never before has America seen such an accumulation of wealth in so few hands,” said Frank Clemente, executive director of Americans for Tax Fairness. “As tens of millions of Americans suffer from the health and economic ravages of this pandemic, a few hundred billionaires add to their  massive fortunes. Their pandemic profits are so immense that America’s billionaires could pay for a major COVID relief bill and still not lose a dime of their pre-virus riches. Their wealth growth is so great that they alone could provide a $3,000 stimulus payment to every man, woman and child in the country, and still be richer than they were 9 months ago. Joe Biden won a tax-fairness mandate in November. We look forward to working with him and Congress to deliver on that mandate by taxing the massive wealth of these billionaires.”

“The updraft of wealth to the billionaire class is disturbing at a time when millions face eviction, destitution, and loss,” said Chuck Collins of the Institute for Policy Studies and co-author of Billionaire Bonanza 2020, a report looking at pandemic profiteering and billionaire wealth. “Billionaires are extracting wealth at a time when essential workers are pushed into the viral line of fire.” 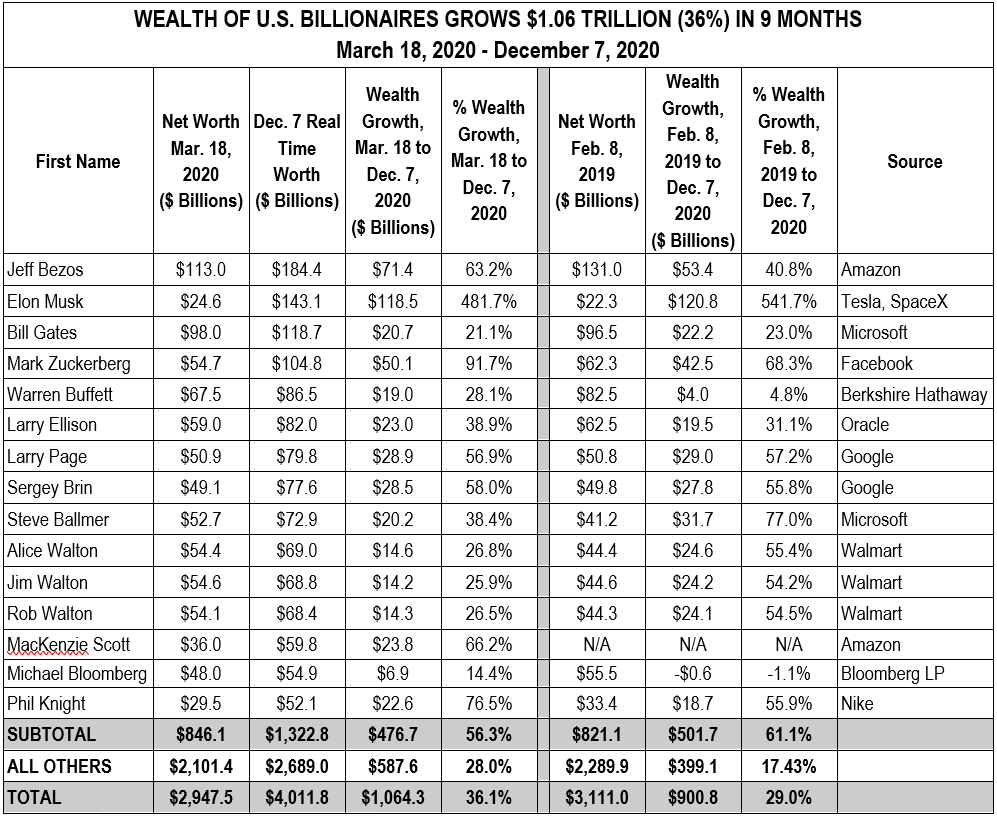 Ordinary Americans have not fared as well as billionaires during the pandemic:

Without a federal fiscal relief package, workers will face even greater loss of jobs and services than they have already suffered. The Economic Policy Institute predicts that without more federal aid 5.3 million public-sector jobs—including those of teachers, public safety employees and health care workers—will be lost by the end of 2021.

Because of long-standing racial and gender disparities, low-wage workers, people of color and women have suffered disproportionately in the combined medical and economic crises of 2020. Blacks and Latinos are far more likely to become infected with Covid-19 and to die from the disease. Billionaires are overwhelmingly white men.

The stock market surge and lock-down economy have been a boon to tech monopolies and helped create four U.S. “centi-billionaires.” Jeff Bezos, Elon Musk, Bill Gates and Mark Zuckerberg are now each worth more than $100 billion. Prior to this year, Bezos had been the only U.S. centi-billionaire, reaching that peak in 2018. Bezos and other billionaires have seen particularly astonishing increases in wealth between March 18 and Dec. 7:

Americans for Tax Fairness is a diverse campaign of more than 420 national, state and local endorsing organizations united in support of a fair tax system that works for all Americans. It has come together based on the belief that the country needs comprehensive, progressive tax reform that results in greater revenue to meet our growing needs.

The Institute for Policy Studies is a multi-issue research center that has conducted ground-breaking research on inequality for more than 20 years. The IPS Program on Inequality and the Common Good, and the Inequality.org website, provide research, advocacy and policy development on issues related to economic inequality.

« ‘Building Back Better’ Should Be a Global Challenge

The U.S. Needs COVID Relief and Renewable Energy, Not a Space Force »