What is the federal role in education?

The federal government funds a multitude of education programs, from early-childhood education in Head Start to the Title I program for disadvantaged public schools and Pell grants and Stafford loans for college students.

As a teacher, for me to make sure my classroom operates, it’s more and more out-of- pocket expenses because we’re told the budgets are being shrunk.

According to the Programme for International Student Assessment, U.S. students score in the average range in reading and science and below average in math – that puts them roughly even with Germany and France and trailing behind China, South Korea, and Japan.[i] Meanwhile, in the United States, 857 students drop out of school every hour of every school day.[ii]

The Obama Administration has proposed the creation of a Community College to Career Fund to train unemployed workers for high-skilled jobs. The president has also proposed universal pre-kindergarten education, to ensure that every young child has access to a quality learning environment. Such initiatives have yet to be authorized by Congress.

More than 80 percent of Americans oppose funding cuts for K-12 education, while more than 70 percent of Americans want more affordable higher education.[iii] But spending caps and across-the-board cuts of sequestration are reducing funding for nearly every education program, and the federally-subsidized student loan interest rate rose from 3.4 percent to 6.8 percent on July 1. Congress is now negotiating a deal that would keep interest rates low in the near term but allow them to rise substantially within a few years – even as the federal government earns billions of dollars in profit each year from student loan interest payments. 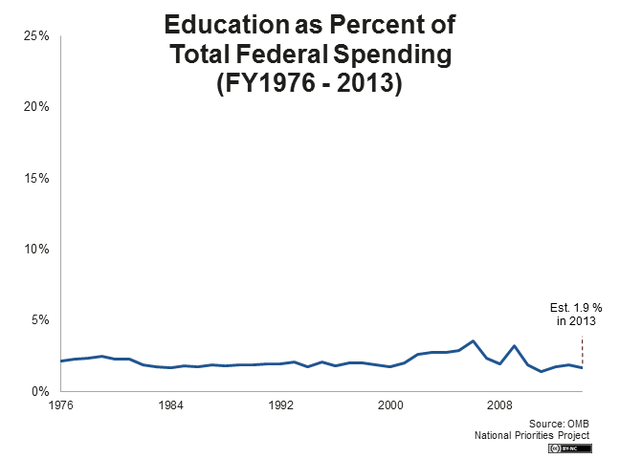 What is the best role for the federal government in improving education in this country? What actions by Congress would you support to make higher education more affordable for the children of low-income and working-class families?

To See How Much Federal Funding Flows Into Your Local School District: