We spend planeloads of money on the wars and, supposedly, to rebuild countries; big skids that you have to forklift around, loaded with hundred-dollar bills. That's my tax money.

The U.S. has spent more than $8 trillion on national security since Sept. 11, 2001. That includes funding for the Department of Defense, the U.S. nuclear weapon stockpile, wars in Iraq and Afghanistan, and homeland security.

President Obama proposes spending $79.4 billion in fiscal 2014 to fund war operations in Afghanistan and Iraq; by way of comparison, the president’s 2014 budget allocates a total of $65 billion for all federal education programs. Through fiscal 2013, an inflation-adjusted $1.65 trillion has been spent on the two wars.

U.S. and the World

Committees in both the House and Senate voted to increase military funding in fiscal 2014, a move that could necessitate additional cuts to domestic programs in order to keep overall spending within mandated spending caps. The House proposed offsetting a 5 percent increase in military spending with an 18.6 percent cut to Labor, Health and Human Services, and Education. 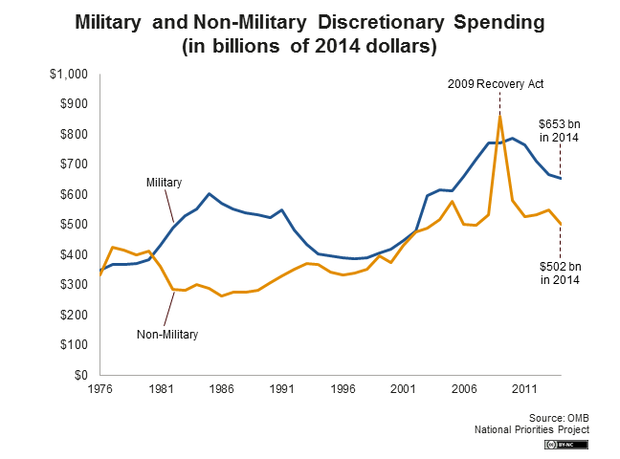 On average the American public wants to reduce military spending by around 18 percent, according to research by the Center for Public Integrity and reported in the Washington Post. Meanwhile lawmakers of both parties have voted to increase military spending in 2014. Where do you come down on this issue?