Slimming Down the Tax Code: the Blank Slate Diet 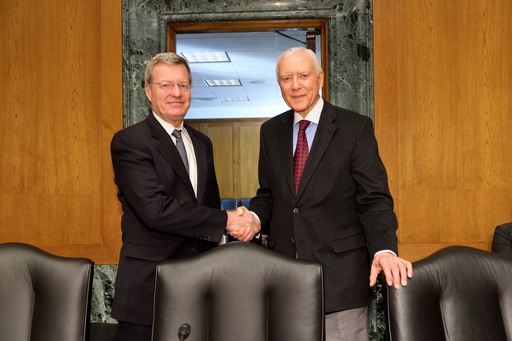 Senators Baucus and Hatch are on the front lines of the tax reform battle this summer (photo courtesy of finance.senate.gov)

On the front lines of tax reform, one of our Four Hot Summer Budget Battles, are two Senators and an 18 pound copy of the U.S. Tax Code.

Yep, 18 pounds. That’s the weight (in paperback) of the U.S. tax code, including $1.2 trillion in tax breaks – also called loopholes or tax expenditures.

Efforts to simplify the code and close many of its loopholes are afoot in Congress. Those leading the charge have been on the road to rally public support. On the Senate side, Senators Max Baucus, Chair of the Finance Committee, and Orrin Hatch, the Committee's top-ranking Republican, are moving ahead with a blank slate.

The blank slate approach means they're starting from ground zero – a tax code with no loopholes. Lawmakers would then have to make a case for specific tax breaks. The requests and justifications for which tax breaks to include in a reformed tax code are due to Baucus and Hatch by July 26th.

It sounds straightforward, but not all Senators plan to participate because there’s disagreement about revenue. Should the reformed tax code raise new money? Should extra money we get from closing loopholes be used to reduce the deficit, spend money on other programs, or lower our tax rates?

What do you think? Have an opinion about the revenue debate or a tax expenditure? Then take action and contact your Senator. Need more information about tax expenditures, what they cost, and who they benefit? In September NPP will publish a series of easy-to-understand, interactive resources to arm you with the information you need to voice your tax reform priorities.

Until then, we’ll continue to watch the battleground and provide updates right here for your beach reading pleasure.