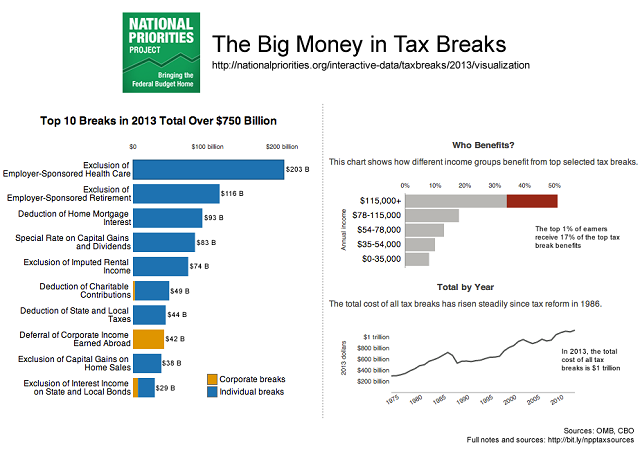 We thought so! That’s why NPP just released The Big Money in Tax Breaks, a treasure trove of information about the loopholes, deductions, and credits that reduce the amount of taxes paid by individuals and corporations. In 2013 those tax breaks resulted in an estimated $1.13 trillion fewer dollars collected by the federal government.

And what are the biggest tax breaks in 2013?

To see the entire top 10, check out our interactive visualization, which also shows who benefits from the tax breaks and their costs over time. Are you a tax nerd? We also released a report (Exposing the Big Money in Tax Breaks) and a never-before-compiled dataset of all tax breaks and their estimated costs from 1974 to 2014.

Make sure you’re on NPP’s mailing list to stay up to stay informed about future releases and findings from this new dataset.

« Washington to Spend Trillions in 2014 (With No Debate or Transparency)