Tell Senator McCain: No $18 Billion Bonus for the Pentagon 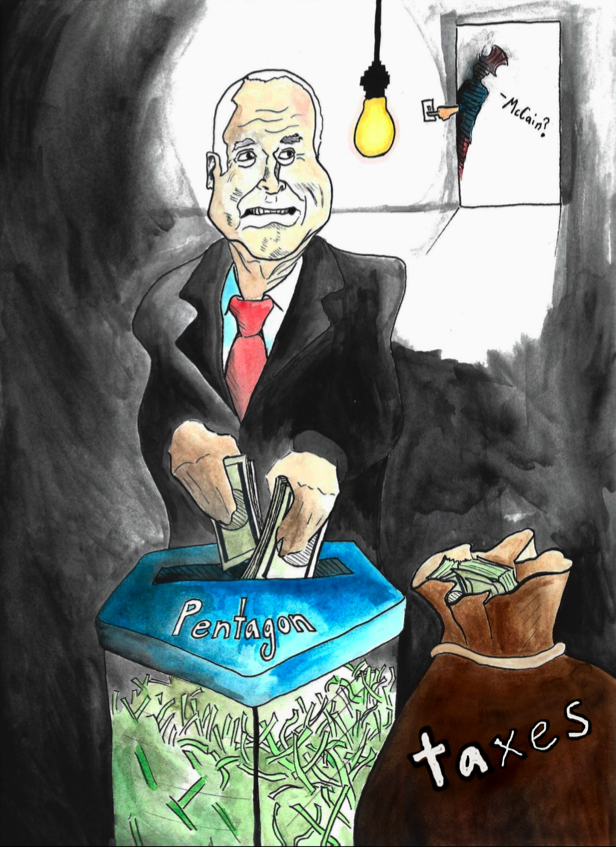 It seems that when it comes to the national military budget, Senator John McCain either gets it, or he doesn’t.

This week, the Senate will begin debating amendments to the National Defense Authorization Act, the main piece of legislation that sets military spending. One of those amendments, introduced by Senate Committee on Armed Services Chair John McCain, would increase Pentagon spending by $18 billion on top of the hundreds of billions already proposed for the Pentagon. The additional funds would go straight to the Pentagon’s Overseas Contingency Operations budget – or what we call the Pentagon’s slush fund, an account that pads the regular Pentagon budget and that can be used for non-war purposes with little in the way of accountability or transparency.

Giving the Pentagon more money will not make us safer, but it will make us poorer. The U.S. consistently spends substantially more on its military than other countries do on theirs. Case in point: in 2015, the U.S. outspent the 7 next highest military spenders (China, Saudi Arabia, Russia, U.K., India, France, and Japan) combined. Military spending made up more than half the discretionary budget in 2015, leaving all domestic priorities to compete for the rest.  And if Senator McCain gets his way, it will strike another blow to bipartisanship, spelling the end of December’s carefully negotiated budget deal that secured additional domestic spending to keep pace with military spending.

We can stop this amendment from padding the Pentagon with billions of dollars it doesn’t actually need. National Priorities Project has joined a coalition asking senators to oppose this ill-conceived amendment. You can help, too. Contact your senator today and let them know you oppose increases to Pentagon spending in the National Defense Authorization Act (NDAA).

« Hiroshima and the Hope President: Ask President Obama to Lead Us Toward a Nuclear Free World

Congress Votes on 2017 Pentagon Spending: The Good, Bad and Ugly »