Six Things You Could Buy Instead of a Border Wall 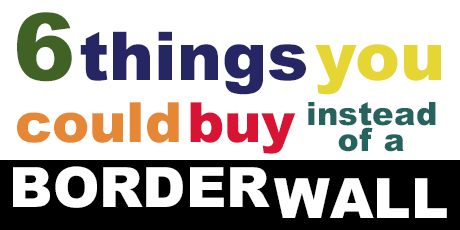 A leaked Department of Homeland Security internal report recently put the cost of President Trump's border wall at $21.6 billion - higher than the $12 to $15 billion price tags that had previously been suggested.

Here's what else we could do with $21.6 billion (and sure, Mexico will be just as likely to pay).

1. Fund the Environmental Protection Agency Through 2020

Four members of Congress have introduced a bill that would eliminate the Environmental Protection Agency – effectively doing away with our strongest federal force for clean water, clean air, protection of endangered species, safe disposal of toxic waste, land conservation and even food quality and safety (yes, the FDA does that too).

Instead of a border wall, we could keep the EPA funded at its current level through 2020.

2. Fund the National Endowment for the Arts through 2163

One of the few things we know about President Trump’s proposed budget is that he wants to cut off all funding for the National Endowment for the Arts – a little less than $150 million each year. In federal budget terms, it’s hard to find something much more insignificant to cut.

NEA grants for art, music and literature have reached every one of the country’s 435 congressional districts.  NEA-funded performances had attendance of more than 33 million, with more than 360 million viewing or listening over TV or radio. That’s equivalent to reaching every single American – more than once.

At the program’s current costs, $21 billion could provide Medicaid – cost-effective, quality insurance – for about 1 in 5 uninsured Americans. That’s like giving free, quality health insurance to the entire state of Missouri.

An additional $21 billion could make a big difference to our schools, even if just for one year. U.S. schools are old, and many are desperately in need of updates, like expansion to accommodate growing enrollment, and energy retrofits to control spiking energy costs.

5. Continue U.S. Contributions to the United Nations Through 2023

Our new President has made no secret of his disdain for the United Nations, trade deals, traditional diplomacy and even some longstanding U.S. allies.

The U.N. has certainly had its detractors, but for those who don’t advocate a wholesale withdrawal of the U.S. from the world, it makes sense to think about keeping some skin in the game. Current U.S. contributions to the U.N. are a little more than $3 billion per year.

That money goes to support peacekeeping, the World Health Organization, the Food and Agriculture Organization and the International Atomic Energy Agency, and other functions of the U.N.

6. Resettle refugees at Obama-era levels through 2030

In 2016, the U.S. helped to resettle 84,995 refugees from all over the world. The cost of resettlement for those refugees was just under $1.7 billion.

It’s often noted that most refugees are women and children. More than half of the U.S. cost in 2016, or $948 million, was resettlement aid for unaccompanied children.

« Tell Congress: No to Bannon on the National Security Council