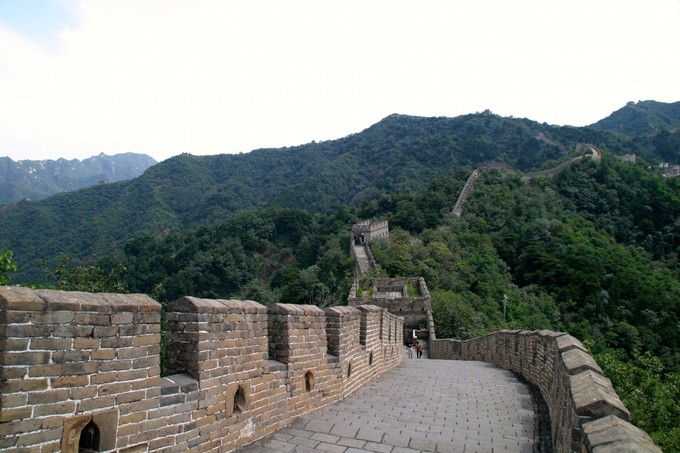 Yes, that is the Great Wall of China, not our southern border. Photo courtesy of PXhere.

On Thursday Congress passed a stopgap funding measure to keep parts of the federal government open until December 21, when Congress must pass another spending measure or again face a government shutdown.

President Trump has said that he will veto any bill that doesn’t give him the $5 billion he has demanded for his border wall, even if it causes parts of the government to shut down and send federal employees into the holidays without their regular paychecks.

Five billion dollars is not huge in a federal discretionary budget of more than $1 trillion. But it’s an incredibly meaningful sum to any number of smaller federal government programs.

Here are nine things we could buy for $5 billion instead of a border wall:

Climate change is real, and it’s here. Sure, it’s depressing that the United States budget for energy efficiency and renewable energy is a paltry $2 billion. Adding $5 billion to make the total $7 billion that wouldn’t be enough to slow climate change, but it would be better than building a wall.

3. Give the Environmental Protection Agency a 60% Raise

Continuing on the environmental theme, this federal defender for clean water, clean air, protection of endangered species, safe disposal of toxic waste, land conservation and even food quality and safety has been under assault by the current administration. A $5 billion raise would be enough to raise its budget by 60%, from $8.2 billion to $13.2 billion.

An additional $5 billion would be a 30% increase to this aid, and could make a big difference to our schools. U.S. schools are old, and many are desperately in need of updates, like expansion to accommodate growing enrollment, and energy retrofits to control spiking energy costs. The $5 billion spike wouldn’t be enough to solve the problems, but in a world where citizens launch GoFundMe campaigns to raise $75,000 for school heaters, it would be a good start.

5. Fund the National Endowment for the Arts through 2051

Since its founding in 1965, the NEA has spent just $5 billion in all, supporting more than 145,000 grants to artists, writers, and performers. NEA support helped create the Vietnam veterans memorial in Washington, DC; the Sundance Film Festival; and is currently partnering with the Department of Defense to implement creative arts healing programs for veterans with traumatic brain injury.

The Low Income Home Energy Assistance program provides support to low-income households to help them afford heating and cooling costs. Its 2017 budget was just short of $3.4 billion, so a $5 billion increase could more than double it.

Increasing the budget for refugee resettlement by $5 billion would allow the U.S. to accept 11 times more refugees than we did in 2018, or 253,000 desperate people.

What’s more, in recent years more than half of refugee applicants were children.

8. Double funding for substance use and mental health

With the United States facing a disturbing decline in life expectancy, experts have blamed both an opioid epidemic and a historically high suicide rate. Substance abuse and mental health should be near the top of the list for increased funding.

And yet the current budget for the main federal agency that handles both substance abuse and mental health, the Substance Abuse and Mental Health Services Administration (SAMHSA), received just $4.1 billion in federal funds in 2017. Adding $5 billion to that could more than double current funding.

Immigration policy isn’t all about walls and deportations. Citizenship and Immigration Services is the anti-ICE (Immigration and Customs Enforcement, which handles deportations.) This is the agency that guides new Americans on the path to citizenship. Its budget in 2017 was just under $4 billion. The program naturalizes around 700,000 new citizens each year, and has naturalized more than 100,000 members of U.S. armed services since 2001.

With a $5 billion raise, you could double its budget.

Check out shareable graphics from this article here!

All budget figures are from NPP analysis of data from the Office of Management and Budget unless otherwise noted.