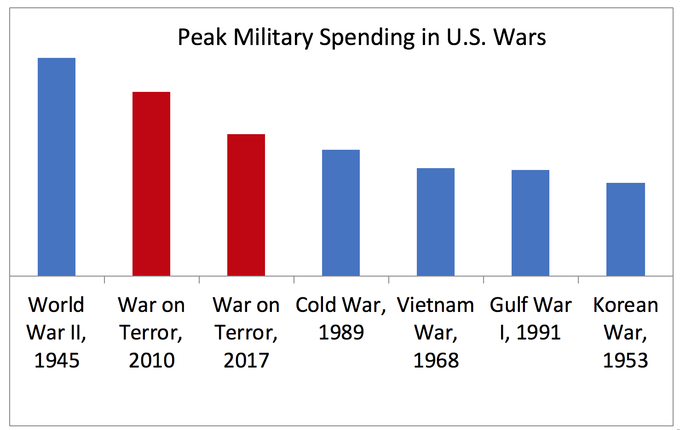 National Priorities Project calculations based on Office of Management and Budget data.

Less than a week after tweeting that the United States military budget is "crazy," garnering heaps of the usual breathless media attention, President Trump has (predictably) reversed course. The president would now like to increase military spending from its current $716 billion to a cool $750 billion.

And before he thought $716 billion was crazy, the Pentagon failed its first-ever audit.

And before the Pentagon failed its first-ever audit, a commission mandated by Congress claimed that the United States needed military budget increases of roughly three to five percent above inflation.

Now, Trump has endorsed a military budget that pretty much exactly meets that target. And which is presumably still crazy.

Got that straight? Good.

What's dreadfully missing from this drama is any reasonable rationale for such an increase, especially at a time when military spending is higher than it has been during any previous war (before the war on terror) since World War II.

This may be the very definition of crazy.