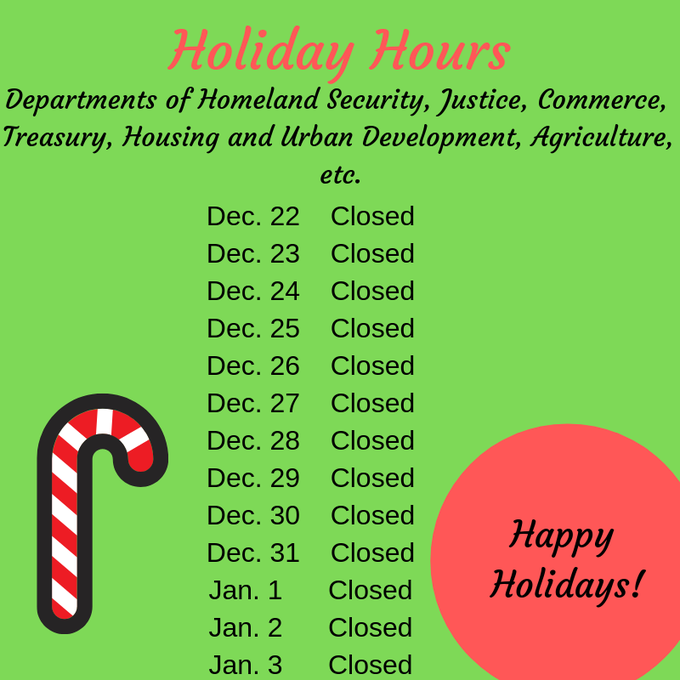 It’s day 14 of the partial government shutdown, with no end in sight.

In the last waning days of a fully functional (being generous) federal government, we wrote about what the shutdown would mean, its possible consequences, and what the prospects were for avoiding it.

The disagreement that started it all: the president’s demand for $5 billion toward building his concrete wall at the border, and Democratic leaders’ insistence that no money for an “immoral” wall was forthcoming.

Nothing has changed here, except that the Democrats have since taken over the House of Representatives after a new crop of legislators were sworn in after the new year. This gives Democrats a bit more leverage in dealing with the president’s demand.

Options for Reopening the Government

Both sides insist they are not giving in. Which doesn’t mean that they won’t, after a shutdown has dragged on long enough and Americans start to get visibly fed up. Democrats on Thursday passed a bill to re-open the government without border wall funding, but so far it lacks enough support to pass in the Senate, let alone withstand a possible presidential veto.

What could a compromise look like? The most obvious answer is a compromise on the amount of wall money. Democrats have already agreed to an addition of more than $1 billion in funds for border security, not to include a wall. The sides could agree to a number in between.

Or, they could compromise on the meaning of “wall.”  The president has wavered on whether or not he really, definitely does (or does not, or does) mean a concrete wall, but others in his administration have said that he really doesn’t. (In other words, he might settle for a fence.)

What is shut down and what's open?

The Department of Homeland Security, Department of Justice, Department of Treasury (including the IRS), Department of Housing and Urban Development, and Department of State are included in the shutdown, among others. More than half of the affected employees are expected to work without pay to complete their “essential” functions (think: Secret Service, TSA agents, border patrol, FBI).

Members of Congress and the president still get paid during the shutdown.

How long could the shutdown last?

Now on day 14, the shutdown is the fourth longest in 40 years– and counting. If it goes until Saturday, January 12, it will be the longest shutdown in 40 years.

What are the consequences of the shutdown?

Approximately 800,000 federal workers are not receiving a paycheck, right during and after the Christmas holiday. Federal workers have told of missing rent checks and child care payments, skipping Christmas presents, filing for unemployment and taking second jobs. And we’re not yet two weeks in.

More than half of these employees are considered “essential,” which means that while they aren’t receiving a paycheck, they still must report to work.

And while no precise estimates have been made, the shutdown is likely to cost the economy millions or even billions of dollars per day in lost productivity and lost government fees and revenues.

Less tangibly, there is the cumulative effect of one more piece of evidence that our federal government is broken. This probably contributes to unfortunate trends like low voter turnout and discourages active participation in our democracy.

What about the politics?

It’s pretty widely reported that both the president and Democratic leadership are pandering to their bases, playing politics with the shutdown. And Democrats in the House are expected to hold a vote to fund the government – without the $5 billion in border funds – as early as tonight. That bill is unlikely to pass the Republican-controlled Senate, thanks to the president’s opposition.

But looking at the American people overall, a majority are opposed to the wall or any broad physical barrier at the border, and a large majority are against using a government shutdown as a ploy to get border funding.

At the end of the day, this shutdown has to end, and not everyone can get their way. If anyone wins, let’s hope it’s the majority of Americans who want nothing to do with border walls or shutdowns.

Shutdown Day 19, and the Real Crisis »