Beyond the Enforcement Paradigm: A Vision for a Transformative Budget for U.S. Immigration 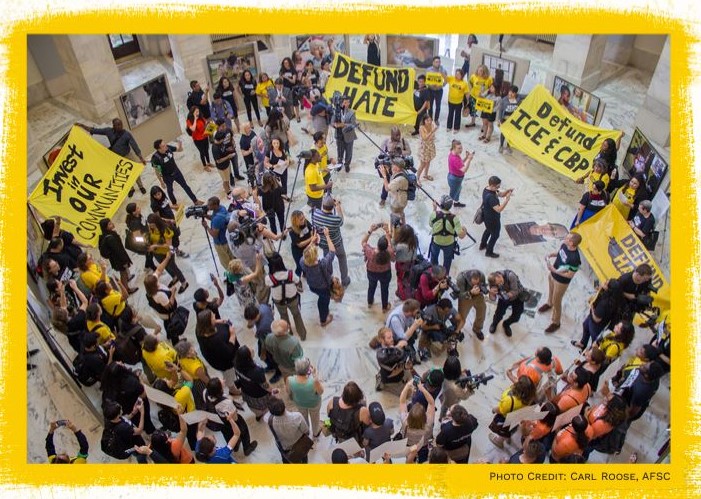 Year after year, Congress approves massive funding increases to agencies that profile, jail, and deport immigrants. In the last two decades, spending on ICE and CBP more than doubled from $12 billion in FY 2002 to more than $25 billion in FY 2021. At the same time, combined spending on ICE and CBP was more than six times greater than the $64 billion spent on Citizenship and Naturalization Services over the same time period.

This is money used to fuel a punitive, inhumane, and racist immigration system that has separated thousands of loved ones, caused hundreds of deaths, and wreaked destruction at U.S. borders, all while siphoning resources away from real community needs and support programs that prioritize everyone’s full humanity.

Amidst the federal government’s FY 2023 budget negotiations, we’re providing a roadmap for members of Congress to invest our taxpayer dollars in a system that welcomes, respects, and honors the human rights and dignity of all immigrants.

Read the full proposal at: bit.ly/DHTransformativeBudget

The Defund Hate Campaign is led by a coalition of organizations that represent directly impacted immigrant communities, faith leaders, and civil and immigrant rights advocates. We are committed to divestment from Immigration and Customs Enforcement (ICE) and Customs and Border Protection (CBP), agencies that tear apart loved ones and harm our communities. Instead, we want our tax dollars used to strengthen our families and communities. The coalition unites communities across the country to demand that Congress cut funding for ICE and CBP and instead invest our tax dollars in health care, education and other vital programs that benefit all of us.

It's Almost As If Military Spending Isn't the Key to Peace »