It's Almost As If Military Spending Isn't the Key to Peace 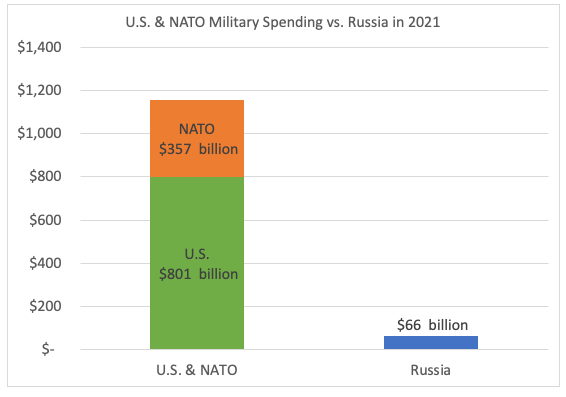 Source: National Priorities at the Institute for Policy Studies, SIPRI

Even as conservatives shout from the mountaintops that Pentagon spending is not high enough, new data released in April show that when it comes to one of the U.S.' biggest adversaries and global bad guys, military spending is clearly not the be-all, end-all of peace and security that it's made out to be.

U.S. military spending had been on an upward trajectory throughout the Trump years, and that trend has continued under the Biden administration, and with a Democrat-controlled Congress.

Just weeks after Congress approved a $782 billion war and military budget, the Biden administration proposed increasing it to $813 billion - higher than at any time under President Trump, and higher than the peak of the Vietnam War or the Cold War.

This is despite the fact that President Biden also ended the nation's longest active war by bringing troops home from Afghanistan. You might expect war spending to decrease after that, but not this time.

Meanwhile, all this spending failed to dissuade Russia's Putin from invading Ukraine, even though it sponsored dozens of bases and tens of thousands of troops in Europe, ostensibly to guarantee the continent's safety.

It's almost as if endless military spending isn't the magic wand we need to guarantee peace.

Note: NATO totals are calculations by the author based on SIPRI data.

« Beyond the Enforcement Paradigm: A Vision for a Transformative Budget for U.S. Immigration