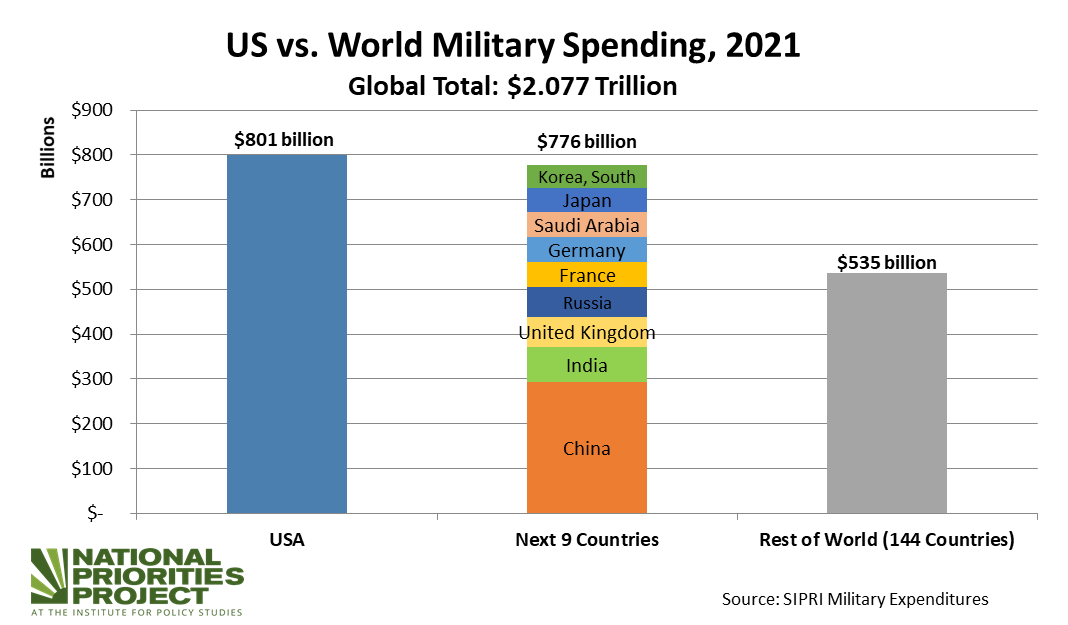 The world spent over $2 trillion on militaries for the first time in 2021, an all-time high after seven consecutive years of increases, according to the latest data on global military expenditures compiled by the Stockholm International Peace Research Institute (SIPRI).

‘Even amid the economic fallout of the Covid-19 pandemic, world military spending hit record levels,’ said Dr Diego Lopes da Silva, Senior Researcher with SIPRI’s Military Expenditure and Arms Production Programme. ‘There was a slowdown in the rate of real-terms growth due to inflation. In nominal terms, however, military spending grew by 6.1 per cent.’

The United States still makes up the lion’s share, with its $801 billion in 2021 representing 39% of the world’s military spending. That's more than the next nine countries combined — still more than 3 years ago when it was merely larger than the next seven combined. Most of these nine countries are geopolitically aligned with the U.S.

And that’s far more than the $535 billion spent by the rest of the world’s 144 countries combined — $266 billion more, enough to fund one year of solar electricity for 757 million households.

While Russia increased its military spending by 2.9%, to $65.9 billion, during a period when it was militarizing the border with Ukraine, that pales in comparison to what the United States and NATO-allied countries are spending, combined — nearly $1.2 trillion, more than 17 times what Russia spent. That failed to dissuade Putin’s aggression toward Ukraine…it’s almost as if military spending is not the key to peace.

Meanwhile, China, the world’s second largest spender, increased 4.7% over one year to $293 billion — still significantly less than the United States. Several U.S. aligned countries also increased their military budgets over the past year, including India, which at $76.6 billion is now the third-highest in the world after China.

All this militarization continues apace, while the world is still dangerously unprepared to invest enough to prepare for ongoing crises like climate change, and the ongoing fallout of pandemics. Over-investment in the military is a factor that left the US so vulnerable to the pandemic in the first place.

Pentagon increases in 2022 could almost fund Build Back Better »