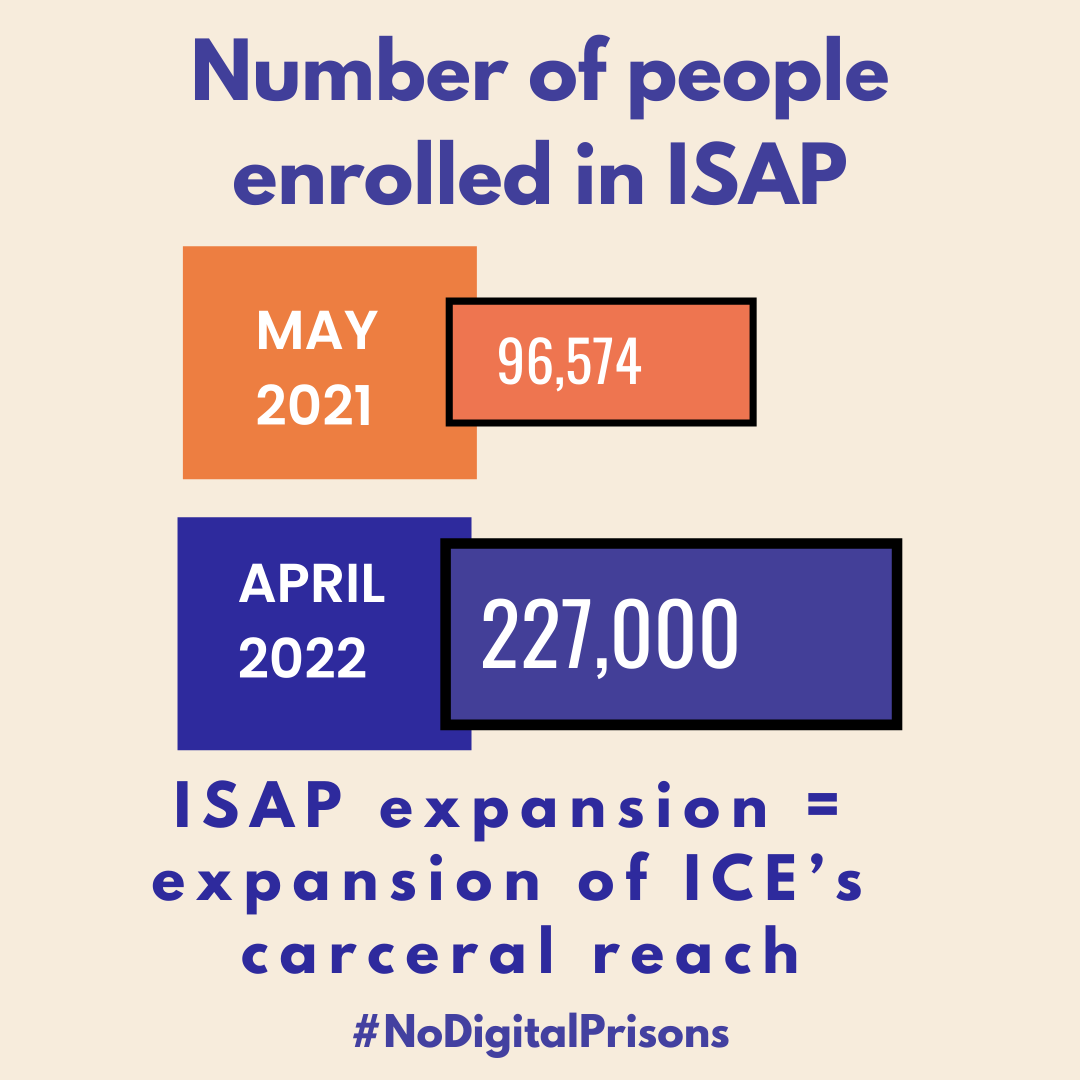 In a victory for movements organizing to defund immigration enforcement and detention, President Biden’s 2023 budget proposal to Congress requested a 9,000 bed reduction in ICE detention bed capacity, a 26 percent cut to current funding levels — the most significant reduction request in the history of the modern immigrant incarceration system. The request could interrupt decades of expansion in bed capacity and funding for immigration incarceration in the United States.

At the same time, the Biden administration continues to support increased funding for ICE’s e-carceration and surveillance programs — so-called “Alternatives to Detention” (ATD) — by the hundreds of thousands. This punitive electronic monitoring program also known as the Intensive Supervision Appearance Program (ISAP), subjects immigrants to electronic ankle shackles, facial recognition surveillance, and geolocation tracking. Biden’s most recent budget request to Congress called for a 20% increase over FY2022 funding levels for the surveillance program.

A new report from over a dozen grassroots groups describes how DHS deceitfully markets ISAP as a means through which to reduce immigrant detention. To date, ICE detention has only grown alongside e-carceration. Since 2005, ICE digital prison enrollment grew from 1,339 to 140,000 funded in the FY2022 budget while ICE detention beds grew from 21,000 to 34,000 beds funded in the FY2022 budget.

And it’s not just new immigrants who are subjected to these invasive and degrading methods of surveillance. Mario Perez, who has lived in the United States for over thirty years since his family migrated to California when he was five-years-old, explains:

“Folks that have been incarcerated and are now on ATD may shy away from sharing their experiences because we are meant to believe that this is the 'better’ option and we should be grateful. With that said, I have not been able to heal from the traumas of incarceration because digital shackles are NOT alternatives to freedom.” 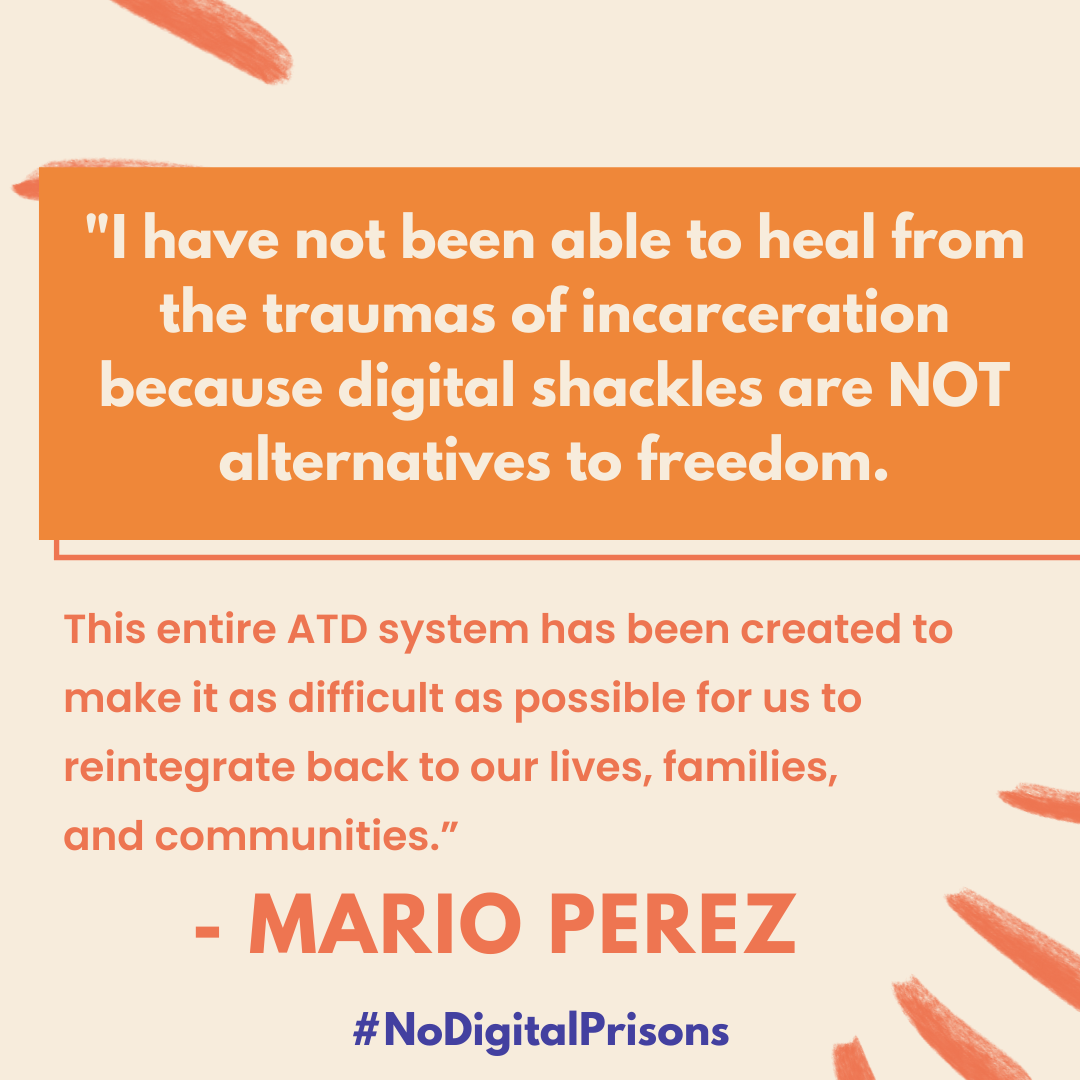 In no way a humane alternative to a physical cage, another recent report found widespread physical and mental harms experienced by an overwhelming majority of people enrolled in e-carceration programs.

As of April 2022, over 225,000 people have been forced to enroll in ISAP, more than double the number of people enrolled when Biden took office.

ICE may even be surveilling you, immigrant or not. A recent investigation by Georgetown University law center reveals that the agency effectively operates as a domestic surveillance agency, accessing datasets containing personal information about the vast majority of people living in the United States.

With a violent history of misconduct and little to no oversight or accountability, ICE’s abuse of power harms a growing number of people in the United States. As one person who has been subjected to ICE e-carceration said in their own words: “To the elected officials that give billions to these surveillance companies: you are sincerely humiliating us as human beings. Put yourselves in our shoes, we did not come to harm anyone.”

Instead of trading one form of incarceration for another, Congress must follow-through on Biden’s request to reduce detention bed capacity while rejecting the administration's proposal to expand funding for surveillance programs. Creating a humane immigration system requires an end to both detention and e-carceration.

« It's Almost As If Military Spending Isn't the Key to Peace