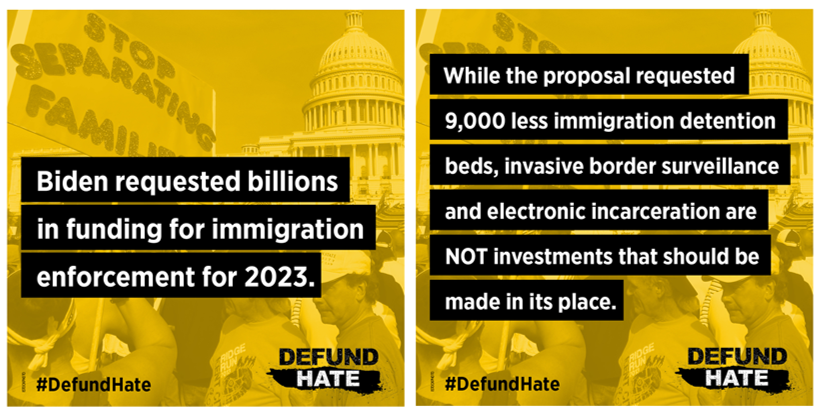 Over the span of 20 years, spending on ICE and CBP more than doubled alongside steady growth in other forms of militarized spending. Altogether, spending on the military, immigrant detention, federal law enforcement, and border militarization accounts for nearly two out of every three discretionary dollars spent in the President’s budget proposal.

FUNDING LEVELS AT A GLANCE

An increase to FY22 funding levels, the President’s Budget requests $15.3 billion to Customs and Border Protection — CBP —  the agency tasked with borders and customs enforcement including the Border Patrol.

While not a comprehensive list, these funding provisions reflect priorities of Defund Hate coalition partners.

NOW IT'S UP TO CONGRESS TO ACT

The Biden administration came into office promising to dismantle Trump’s harmful immigration policies. But we have been dismayed to see violent and deadly immigration enforcement policies continue to be funded at obscene levels. As Congress now moves toward a negotiated FY2023 budget, we call on them to build off of the cuts indicated in President Biden’s budget proposal, boldly reduce DHS funding for ICE and CBP, and reinvest in our communities.

« The Climate Justice Movement Must Be Anti-War: Notes from Antiwar Organizers