Education spending rises by around $1.5 billion in the president’s fiscal 2013 discretionary budget. That’s roughly a 2 percent increase as compared to 2012. Education is one of the few spending areas in which the new budget calls for an increase over the previous year. Indeed, despite widespread public concern about the deficit, a February 2011 poll found that 62 percent of Americans supported more funding for education in the federal budget—the strongest support for any type of spending. However, even with the $1.5 billion increase in fiscal 2013, education still will only comprise around 2 percent of total federal spending, as it has for decades. 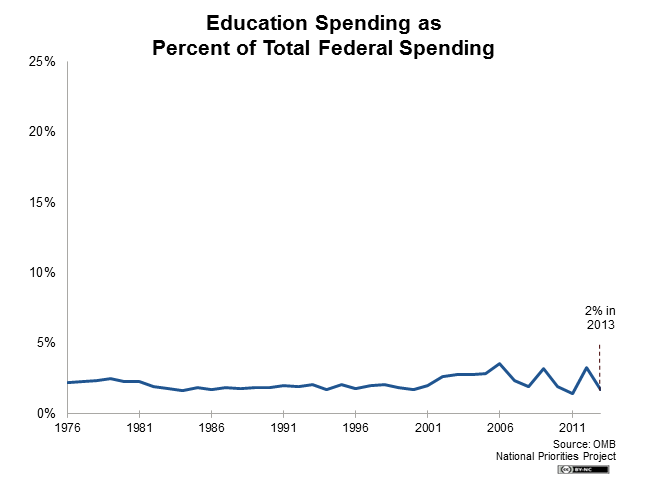 An initiative in the new budget that has gotten a great deal of attention is an $8 billion multi-year pledge to create a Community College to Career Fund that would help train unemployed workers for high-skilled jobs. The program would be administered jointly between the Department of Education and the Department of Labor, and would create new partnerships between community colleges and businesses to train and place 2 million workers in high-growth industries.

The increasing cost of a college education continues to be a major issue, especially as the poor economic climate forces states to reduce their support for public education. As a result, an increasing number of graduates are leaving school with higher levels of debt. The president’s new budget seeks to reward schools that contain their costs by providing more than $10 billion in student financial aid grants and loans specifically for students at those schools, and especially for economically disadvantaged students. The new budget also includes $36.7 billion in available aid for the Pell Grant program, which provided need-based grants to 9.6 million college students in 2012. The 2013 funding level is a slight increase over 2012 levels.

See the Numbers for Your State