Interactive: Where the Money Comes From

A spending plan is really only half of the president’s budget. The other half is revenues. How much tax revenue does the president expect in 2013, and from what sources? The budget estimates $2.9 trillion in tax revenue next year, a 16 percent increase over 2012. This chart shows where all that money will come from. 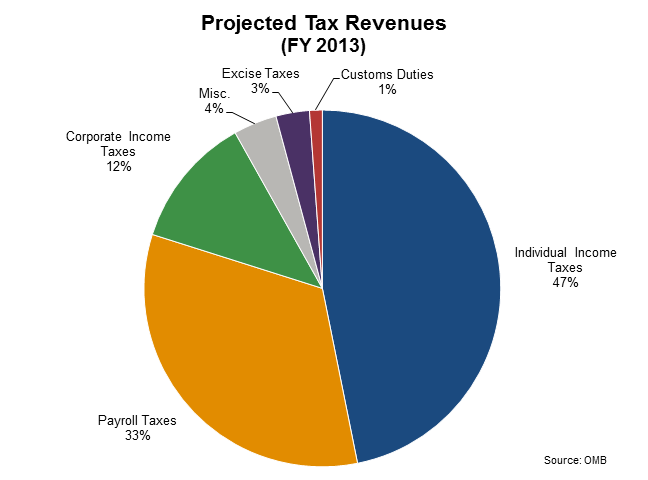 The major sources of federal tax revenue have shifted over time. Corporate income taxes are projected to make up only 12 percent of tax revenues in 2013. But in past years, corporate taxes comprised a much larger share of federal revenues. This interactive visualization shows how the different kinds of taxes have risen or fallen over time as a percent of all taxes flowing into the U.S. Treasury.

Our apologies for the inconvenience--Adobe Flash Player version 11.1.0 or greater is required to view this chart.

As compared to recent years, payroll taxes make up a smaller share of total revenues—33 percent in 2013, down from 36 percent in 2011 and 34 percent in 2012. The president and Congress have temporarily reduced the payroll-tax rate for workers. Payroll taxes fund the Social Security and Medicare programs, and normally workers pay 6.2 percent of their wages to fund those programs. But through Dec. 31, 2012, they’ll pay just 4.2 percent. Since payroll taxes are trust funds that the Treasury can use only to pay for Social Security and Medicare, some experts have expressed worry that this payroll-tax holiday puts Social Security in jeopardy by reducing its dedicated funding source.

As compared to 2012, revenue from individual income taxes is projected to increase by around $175 billion in fiscal 2013. That is in part the result of President Obama’s proposal to let the Bush tax cuts expire for individuals making more than $200,000 per year and families making more than $250,000. A February 2012 poll found that 85 percent of Americans favored raising taxes on the wealthy to help reduce budget deficits.

In order for the federal government to raise the projected $2.9 trillion in fiscal 2013, the president’s assumptions about the economy must prove to be more or less accurate.

Not surprisingly, though, given the complexity of the economy, the president’s assumptions are often incorrect. Last year the president’s budget was too optimistic; the economic recovery has been slower than OMB planned. But this year the projections have been too pessimistic. The president’s 2013 budget projected an unemployment rate of 8.9 percent for fiscal year 2012 and 8.6 percent in 2013. But the unemployment rate was already well below 8.9 percent as of February 2012, hovering around 8.3 percent. The new budget also assumed annual GDP growth of 2.7 percent in fiscal 2012, and actual growth is now likely to exceed that estimate.