Health Spending in the President's Budget 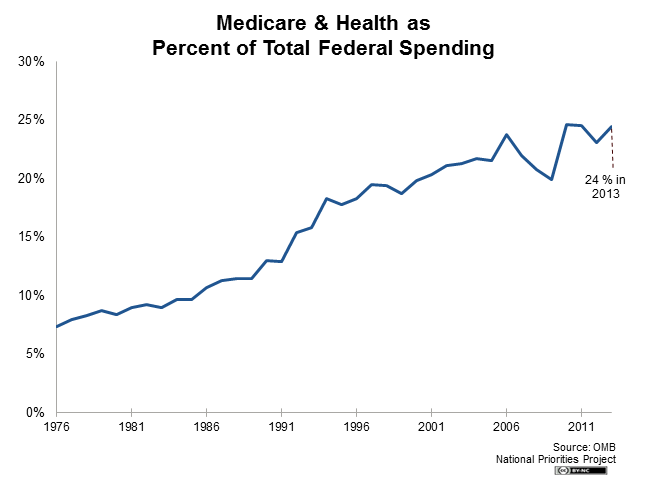 So what’s behind the steep increases in the cost of health care? While there are numerous contributing factors—such as demographic changes—the biggest driver of rising costs is technology, according to the Congressional Budget Office and numerous healthcare economists. A century ago, health care was very inexpensive because there was little that doctors knew how to do, so there wasn’t much to pay for. But technological advances have given doctors ways to diagnose or treat many more ailments, and health care has gotten more and more expensive as a result. That’s in large part why health spending today accounts for 24 percent of the federal budget.

Lawmakers in Washington are searching for ways to control health care costs, and President Obama’s 2010 health care reform legislation, the Patient Protection and Affordable Care Act, sought to impose some mechanisms to do so. Lawmakers face overwhelming public support for federal health care programs, thus health care reform and cost containment are a political minefield, since any changes could be met with overwhelming resistance. For example, a January 2011 poll found that only 8 percent of Americans would support major reductions to Medicare. Thus lawmakers are searching for ways to contain costs that also will preserve overwhelmingly popular programs. One such cost-containment initiative is called “bundled payments,” which could give medical professionals an incentive to improve coordination of care and reduce unnecessary tests and procedures.

One reason the Medicare program is so popular is that it has been highly successful at bringing relatively low-cost health care to nearly every senior citizen in the United States. Medicaid, the health care program for low-income Americans that is jointly funded by the federal government and the 50 states, also enjoys wide popularity, though to a lesser degree than Medicare. In the January 2011 poll, 86 percent of Americans opposed major cuts to Medicaid. And while Medicare has successfully reached most American seniors, Medicaid has not done the same for low-income families. According to the Census Bureau, 8.5 percent of all children in the United States and 17 percent of all adults have no health insurance. It would cost an estimated additional $190 billion per year to provide health insurance for all of them, based on the costs of the Medicaid program.

The 2010 health care reform legislation attempts to dramatically increase the number of Americans who are insured. The federal government, the states, employers, and individuals would all share in the cost to do so. Bringing millions of new people into the ranks of the insured also could slow down the growth of insurance premiums, since there would be more healthy people to offset the costs of those who require substantial medical care.

See Federal Health Spending in Your Own County

In the Federal Priorities Database, you can see how much the federal government spends on different health care programs in every state and county in the U.S. The database has numbers on Medicare Hospital Insurance, Medicare Supplemental Medical Insurance, Medicaid, and the Children’s Health Insurance Program.