Military Spending in Fiscal 2013 and Beyond

President Obama’s new budget includes $525 billion for the Department of Defense. Adjusted for inflation, that’s 2.5 percent less than fiscal 2012 levels. That’s the first cut to the Pentagon’s base budget in over a decade. The American public is divided over reducing military spending, according to a recent poll by the Pew Research Center. Forty-five percent of Americans say a smaller military can be just as effective, while 44 percent say the cuts will reduce effectiveness.

The $525 billion Department of Defense base budget does not include war costs, the U.S. nuclear weapons program, or international military assistance. The president’s budget includes $89 billion for military operations in Iraq and Afghanistan. Due to the end of combat operations in Iraq and projected reductions in the number of troops deployed in Afghanistan, that represents a 23 percent decline from 2012.

The new budget also includes $17.7 billion for the defense activities at the Department of Energy, a 5.5 percent increase relative to current levels. Most of that money funds the nuclear weapons program.

Relative to projections made in the president’s fiscal 2012 budget, the Pentagon’s budget will decline by a total of $259 billion over five years and $487 billion over 9 years. 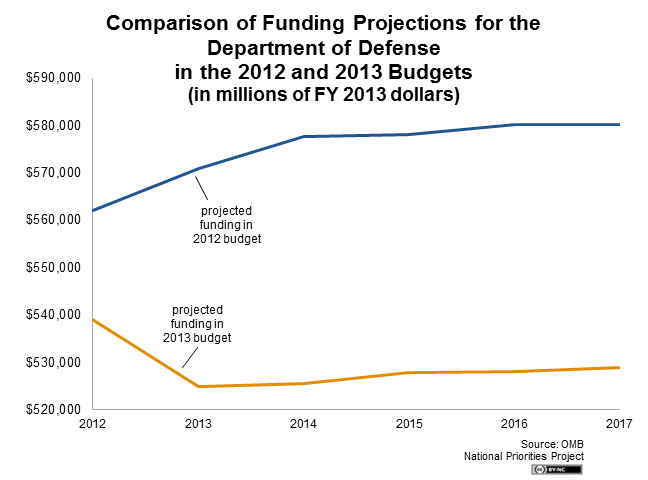 But note that those are cuts only relative to projections made back in 2012; they are not actual cuts to funding. As you can see in the chart above, the president’s 2013 budget cuts the Department of Defense budget in fiscal 2013 by around $14 billion as compared to 2012. But in subsequent years, the DoD budget will grow slightly. Thus while there’s much talk of deep cuts to the military, those are cuts only to previous projections. (See federal spending on Department of Defense procurement contracts in your own state.)

The Budget Control Act of 2011 mandates roughly $50 billion in annual cuts to military spending, to occur in fiscal years 2013 through 2021. But the president’s new budget proposes changing the way those cuts would affect the military and non-military budgets beginning in fiscal 2014; the changes would allow for deeper cuts to non-military spending and thereby could protect the military budget from additional cuts in fiscal 2014 and thereafter. For more detail about funding for specific Pentagon programs, see National Priorities Project’s Analysis of the Fiscal Year 2013 Pentagon Spending Request.

Belt Tightening at the Department of Defense

To cut its budget relative to projections made in 2012, the DoD has proposed reducing the overall number of men and women in uniform over the next five years in both active units and the National Guard and Reserve. Most of the reductions would be in the active Army (13 percent) and Marine Corps (10 percent). Both services would still be larger, however, than they were before the wars in Iraq and Afghanistan began. DoD will also delay or reduce several major weapons programs, and the new budget calls for two new rounds of military base closures in 2013 and 2015.

One cost savings proposal is particularly controversial—changes to the military’s health insurance program. Among other provisions, DoD is proposing increases in how much service members would pay in premiums and copayments. The proposed changes would not have a significant impact on current members of the military, retirees or survivors. According to former Defense Secretary Robert Gates, the Pentagon’s health care costs have grown over a decade from $19 billion annually to $50 billion, with no increase in premiums since the TRICARE program began. Many members of Congress, however, are unwilling to consider such increases in costs for service members and their families. For more about rising health care costs, see Health Spending in the President’s 2013 Budget.