Pick Your Better Border Budget Battle: Can we reach a deal on the border crisis? 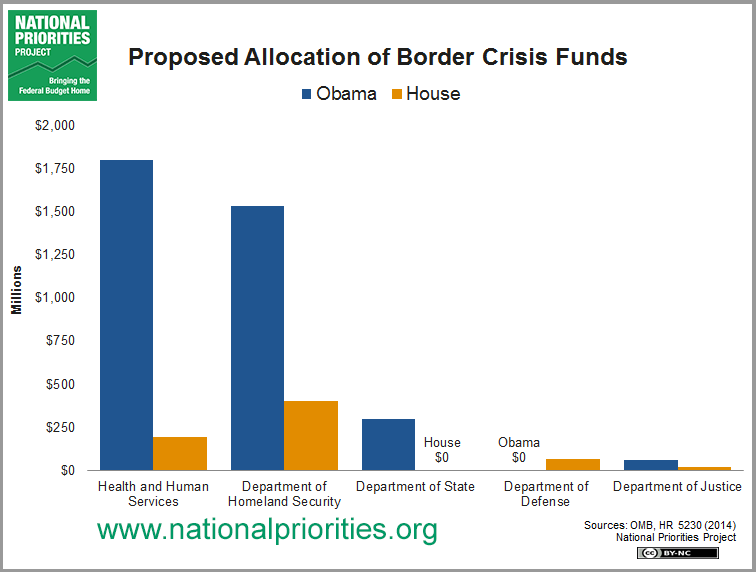 It’s August, and Congress skipped town without closing a deal on a border crisis bill, leaving tens of thousands of unaccompanied immigrant children in limbo at our border. President Obama and the House of Representatives have each issued funding proposals to deal with the border crisis. But these proposals express vastly different priorities about border security, refugee assistance, and legal representation, echoing the deep divisions about immigration reform overall.

The prospect of reaching an agreement on such hot-button issues under the shadow of November elections is anything but a foregone conclusion.  The proposals are drastically different: President Obama’s $3.7 billion package and the House of Representatives’ $694 million package would each amount to a tiny sliver of the overall budget, but the differences in how they would spend the funds are striking.

Aside from the difference in overall spending levels, here’s how President Obama and House of Representatives would allocate federal funds to deal with the crisis:

Repatriation and Deterrence in Home Countries – Department of State, others

This includes repatriation programs for deported children in their home countries, media campaigns in Latin American countries to deter more children from making the trip to the U.S., and programs to address the root causes of the exodus.

While the House doesn’t allocate any new money for repatriation efforts, they suggest that the State Department could use up to $40 million in previously appropriated funds for these purposes.

Both proposals include money to hire additional judges and teams to hear deportation cases. Otherwise, they differ in important ways: President Obama’s proposal includes funds for legal representation for children. Children and adults who are facing deportation are legally entitled to a lawyer, and legal representation is known to make a big difference in outcomes, but they often can’t afford it.  Meanwhile, the House proposal includes funds for technology to help move cases through the system faster.

House: $22 million, including $9 million for technology to expedite cases

Only the House proposal calls for any Department of Defense funding, and it doesn’t specify what it’s for beyond Army and Air National Guard “necessary expenses,” which would presumably be related to border security. President Obama’s proposal relies on the considerable $1.5 billion he devotes to border enforcement through Homeland Security.

What do you think?

« Penny on the Dollar: US Foreign Aid is about One Percent of Spending

$1.5 Trillion and Counting: What New Involvement in Iraq Means for Federal Spending »