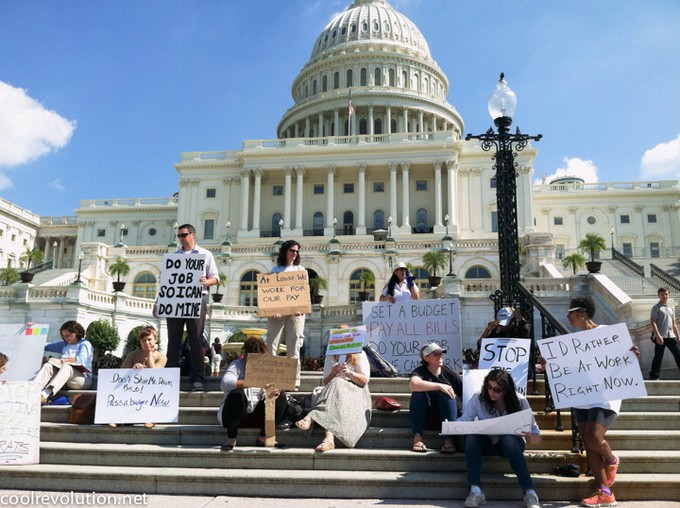 Government workers protest the shutdown last October. Congress passed a spending bill that will avoid a repeat this October. Photo by cool revolution.

In a 27-page document (shorter than your average term paper) and with little debate, Congress has settled how the government will spend billions of dollars over the next couple of months. Here’s what you need to know:

Lawmakers managed a mild feat of bipartisanship in passing a continuing resolution that succeeded in one major goal: avoiding a repeat of last year’s government shutdown. The resulting legislation meets government spending limits and continues funding mostly at last year’s levels. But the funding only lasts until December 11, when lawmakers will need to step up and make some hard decisions to create a budget for the next 10 months.

While the decision to authorize military aid and training for Syrian forces received lots of media coverage, you might have missed the congressional debate if you blinked. This add-on involves no new funding, and only became part of the funding bill for political purposes. If you feel strongly about this, it’s not too late to weigh in: Congress will revisit this, too, in December. See how your representatives voted, and tell them what you think.

#3. What did and didn’t get love from Congress

What got love: In a few key areas, lawmakers managed to respond to current crises by tweaking funding from last year’s levels: the bill includes $88 million in new funding to fight the Ebola outbreak in Africa, and $64 million to address veteran’s health through the Department of Veteran’s Affairs. In the scheme of the more than $1 trillion federal budget, these are much-needed, though tiny investments.

What didn’t get love: remember the crisis of unaccompanied children at our border? President Obama had requested $3.7 billion to deal with the crisis, and House Republicans countered with $694 million. Instead, Congress ducked the issue altogether and allocated zero additional dollars to address the humanitarian crisis.