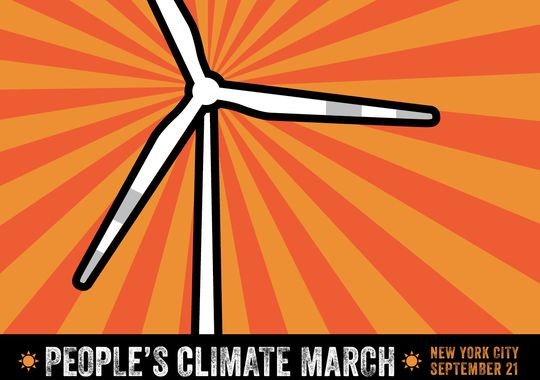 This Sunday, the People’s Climate March, billing itself as the largest climate march in history, will flood the streets of New York City to draw attention to the urgent need to address global climate change. Tens, if not hundreds, of thousands of people will participate in the march set to coincide with a UN Summit on the climate crisis.

One of the goals of the People’s Climate March is to push governments to act. In the days leading up to the march, its message has reached the ears of some members of Congress, despite the fact that both the House and Senate have left once again for recess until after the November election without taking up any legislation on climate change.

So, what has the United States government done about climate change recently? Well, from a budget perspective, not much. In fiscal year 2014, the federal budget included only $975 million for energy conservation initiatives. That’s an 87% decrease from what President Obama originally requested for such initiatives ($7.91 billion).

Either number is just a tiny fraction of what our nation spends on other programs. For example, the amount of money we spent on climate change in 2013 was just 4% of what we spent on the military. In fiscal year 2014, the Department of Defense budget is $501.73 billion, and the cost of one highly flawed weapons system, the F-35 Joint Strike Fighter, is $7.54 billion alone. And we’ll siphon off $223.45 billion just to pay off interest on the federal debt.

Even the Pentagon agrees that climate change is a significant national security threat. So why hasn’t Congress done more to fund energy and environment initiatives that address the short- and long-term consequences of global warming, instead of pumping more cash into military programs, some of which top Pentagon officials have said they don’t want?

Think about it: for the amount the U.S. will spend this year on its nuclear weapons stockpile, $18.6 billion, we could power 12.2 million homes with clean solar energy. With the annual cost of just one corporate tax break, $65 billion, we could provide 7 million households with wind power for 10 years. And imagine what just a portion of $92.33 billion – the amount we’ll spend on war overseas in 2014 – could do for climate change initiatives like energy conservation, home energy retrofits, and alternative energy research and development. You can explore some of the possibilities here.

If lawmakers would listen to the budget priorities of the American people, they would put fewer federal dollars into military and more into domestic discretionary programs like those advocated by the People’s Climate march.

Making the people’s priorities heard starts with a step.  A march. It continues with you talking to your friends and neighbors, sending out a tweet, reaching out to your legislators, and casting a vote. As U.S. Representative Carol Shea-Porter (NH) said recently, “we have the power and the moral obligation to stop climate change before it’s too late.”

The People’s Climate is #WorthSaving and within reach. All it takes is the political will to get it done.

« State Smart: Income, Business, and Other Taxes in Your State