State Smart: Income, Business, and Other Taxes in Your State 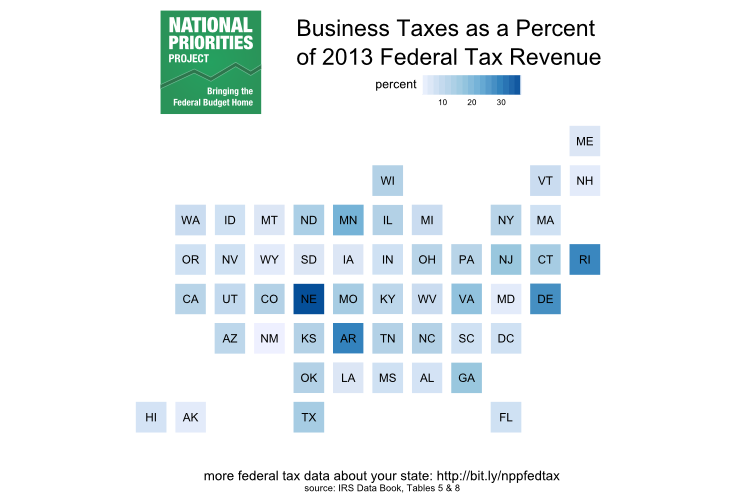 We’re one week closer to the launch of State Smart, NPP’s one-of-kind website that shows how the federal budget affects the residents of all 50 states.

As we get closer to rolling out State Smart, we’re releasing some of the datasets that power it. This week we feature taxes: everything from business taxes to income taxes to the payroll taxes that fund Social Security and Medicare. The numbers are available for every state in the union, from 2002 to 20131:

NPP’s Taxes and Revenue 2014 Voter’s Guide reminds us that these taxes fund a vast array of programs and public investments. But support for these investments has become increasingly controversial in recent years, partly because the U.S. has less money: tax collections declined sharply during the recent recession and, as of 2013, hadn’t climbed back to 2007 levels.2

Business and Corporate Taxes in the States

The Voter’s Guide also reveals that corporate income taxes as a percent of overall tax revenue have been trending downwards and are projected to make up less than 14 percent of all federal tax revenue in 2015.

According to the Taxes and Revenue Voter’s Guide, polling shows that 66 percent of Americans say corporations don’t pay enough in taxes. Check the federal business taxes in your own state, and decide if the current composition of federal taxes reflects your priorities.

1. All years in the State Smart tax data and in this piece represent federal fiscal years, which run from October to September.
2. When adjusted for inflation.