State Smart: Cost of Military Contracts, Your State, and the Election 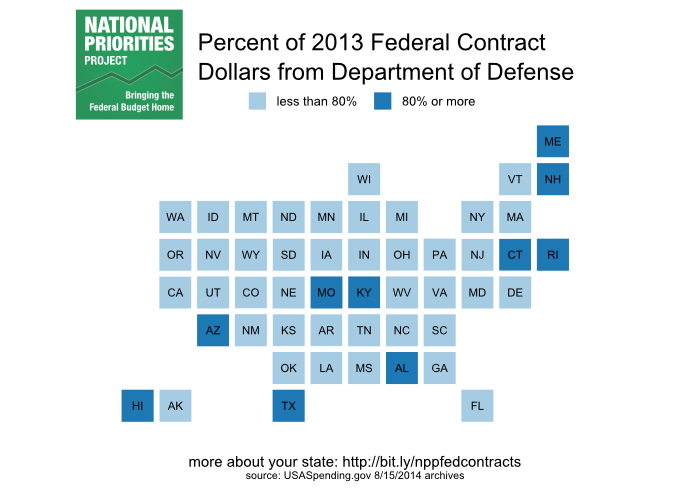 Next month National Priorities Project will launch State Smart, an interactive website that tracks the flow of dollars between the U.S. Treasury and the states. From Alabama to Wyoming, State Smart will be the only place to find complete federal spending and tax contributions for every state in the nation.

Our own government stopped publishing these numbers a few years ago. At NPP we decided to bring them back because we believe in the power of an informed electorate.

In the weeks leading up to the launch, we’re releasing some of the data that powers State Smart. Today’s spotlight is on federal contracts, with an emphasis on the Department of Defense.

If you’ve read our Military and War Spending Voter’s Guides, you know that the president has requested $496 billion for the Department of Defense next year.

In ten states, 80 percent or more of federal contract spending came via the Department of Defense:

We’ve recently written about other job-creating priorities that compete for a share of this money, such as unemployment benefits and the Highway Trust Fund. Check federal contracts in your own state, read the Voter’s Guides, and decide if current lawmakers are spending money in a way that reflects your priorities.