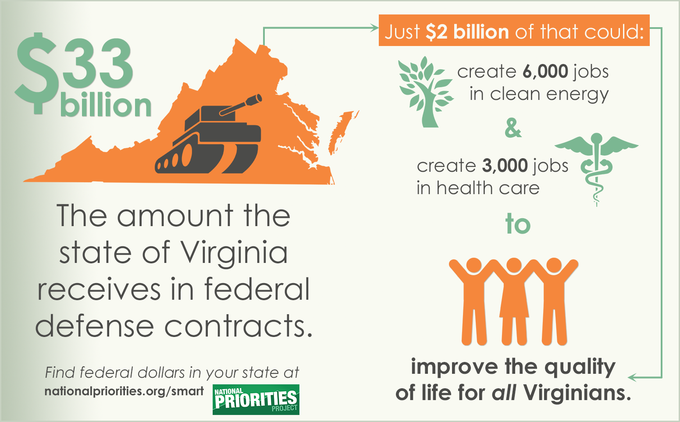 As a native Virginian I care about my state and its people. I was born in Virginia and have lived there for most of my life. The issues that affect Virginia affect me, my family, and my friends. One of the most important issues for many Virginians is the military and military spending.

Federal spending on defense affects people throughout the country, but in few places are those effects more tangible than in Virginia. With over 140,000 Virginians directly employed by the military, Virginia has the highest concentration of military employees in the country. This figure does not include the people employed with the over $33 billion in defense contracts that went to Virginia firms in 2013. In total, Virginia received over $45 billion in military spending in 2013.

It turns out that Virginians would have little reason to fear that less military spending would mean fewer jobs. If money were diverted from the military to other important projects, Virginia could actually end up with a lower unemployment rate. For example:

These numbers indicate that a redistribution of resources away from the military and towards other worthy sectors would not hurt Virginia’s economy or people, but would in fact result in more jobs and improved quality of life. There is even a department of defense program that helps local businesses and workers make the transition when military programs are downsized or eliminated. Virginians can critically evaluate the costs and benefits of exorbitant military spending without worrying that a cut for the military will mean a cut for them.