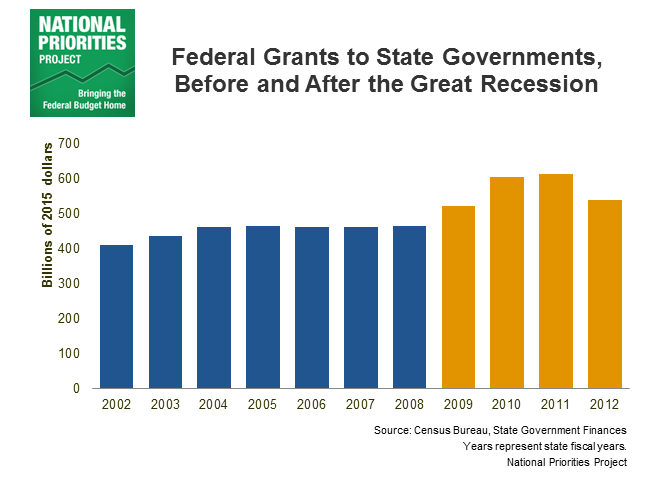 Last week Lindsay examined how the federal budget directly touches the lives of people in your state and community. Using data from State Smart, NPP’s new project that tracks federal dollars in every state, she highlighted federal aid to individuals.

This week we turn the spotlight to state governments, which also received a post-2008 uptick: federal grants to state governments rose nearly 32% between 2008 and 2011. Some of this increase is a result of the 2009 American Recovery and Investment Act (“Recovery Act”). For example:

Federal grants to states declined in 2012 but still accounted for almost one in three state revenue dollars. Those dollars impact the lives of people all over the country.

“I have daughters with severe intellectual disabilities and autism….Without Medicaid…our children would be living in some sort of institutional setting”
- Clay, Plano, TX

"We were on food stamps, WIC, and Medicaid for several years... Government assistance kept us and our children healthy until we could take care of ourselves again."
- Brandi, Tampa, FL

If you have a story about the federal budget, please share it with us. And remember that November’s election is a chance to express your budget priorities: get ready with our Voter’s Guides.

Lastly, if you’re not already on our mailing list, sign up to be the first to know when the full, interactive version of State Smart launches.

Participatory Budgeting Can Transform our Democracy »