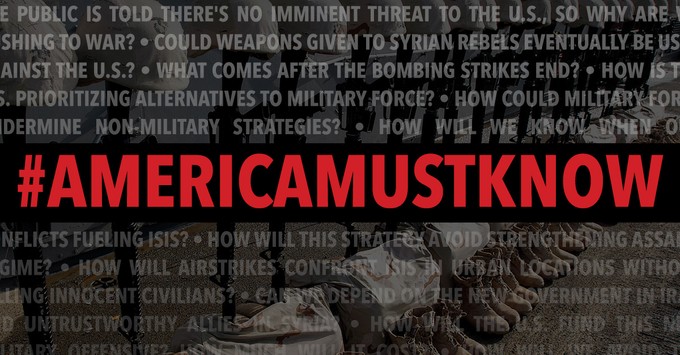 In the wake of President Obama’s speech to the nation last Wednesday, and with a bill in Congress today authorizing further military action against ISIS, we are left with several troubling questions.

At the top of the list are such critical, unanswered, questions as:

If these questions are troubling, the answers are even more so.

Forgotten Options in the Rush to War

President Obama spoke about his intention to "degrade and ultimately destroy" ISIS. He asked lawmakers and American citizens alike to support his decision to "do what it takes" to defeat ISIS. America’s armed forces are without a doubt unrivalled in the world, in their training, the arsenal of weaponry at their disposal, and their ability to execute complex missions. Yet like the carpenter with a hammer who treats every situation like it’s a nail, just because we can respond militarily does not mean we should.

America should not be so quick to rely on its military might to address the challenges posed by terrorist organizations. Vox’s Zach Beauchamp notes that “by declaring an open-ended, years-long war against ISIS, Obama risks trying to solve a fundamentally political problem by military means.” One concrete example of how we default to military response can be seen in the unbalanced investment in military vs. diplomatic solutions. What would happen if we dedicated more than just $1 in diplomacy for every $17 we spend on the military? What other options could we pursue instead?

Our friends at Win Without War have outlined five key steps that provide an alternative to military action against ISIS:

Learning from Our Mistakes

We need to embrace lessons from our past involvement in the region. Recall that in 2003, President Bush told us that war in Iraq would require a "lengthy campaign" but estimated its cost at only $60 billion, a small fraction of the cost to date ($817 billion). Eleven years later, our nation has sacrificed not only American lives but our own social and economic potential, as we sunk over a trillion dollars into war while investing less in our domestic needs (such as addressing our crumbling infrastructure, revitalizing the job market, or reducing the burden of student loan debt).

And the situation in Iraq has not gotten any better. This is a key point that bears repeating. Despite apparently noble aspirations to help Iraq achieve a viable, peaceful democracy, our involvement has instead further muddied and even exacerbated centuries-old ethnic and religious divisions, while providing an endless supply of fodder to fuel the flames of extremist terrorist groups like al-Qaeda and ISIS. Has the outcome of those eleven years of war in the region been worth the cost in dollars and lives?

While the full scope of the human and financial cost of a new long-term and unpredictable conflict against ISIS cannot be calculated, we already know the President has asked for $5 billion to train and provide arms to Syrian rebels, on top of a likely $85.1 billion in war funding for FY 2015 alone.

The time for us to ask hard questions (and demand solid answers) about our role in this conflict is now. So far, electoral politics seems to be impeding this process, with Congressional leaders offering a range of support for the approach taken by the Executive Branch (by dodging the opportunity/responsibility to fully vet the campaign through Congressional oversight). Few have clearly articulated, as has the Congressional Progressive Caucus, a demand that Congress fully take up this issue:

“Congress must weigh in when it comes to confronting ISIL through military action. The voices of the American people must be heard during a full and robust debate in Congress on the use of military force. Speaker Boehner should put legislation authorizing military action on the floor of the House of Representatives before Congress leaves for the upcoming district work period.”

National Priorities Project has spent more than three decades tracking the cost of war, shining a bright light that shows what we lose as a nation when we invest entirely in military responses to conflict overseas.  It is time that our elected officials stand with us to ask – and answer – these questions, before putting the lives of more of our sons and daughters, and countless billions more of our tax dollars at risk.

Congress is in session, and in Washington, for only a brief window this week – and will be voting on a bill to authorize further military action against ISIS. Take action now, before it’s too late, and tell your representatives that you want answers.

« State Smart: Cost of Military Contracts, Your State, and the Election