What Has the U.S. Spent Fighting Ebola? 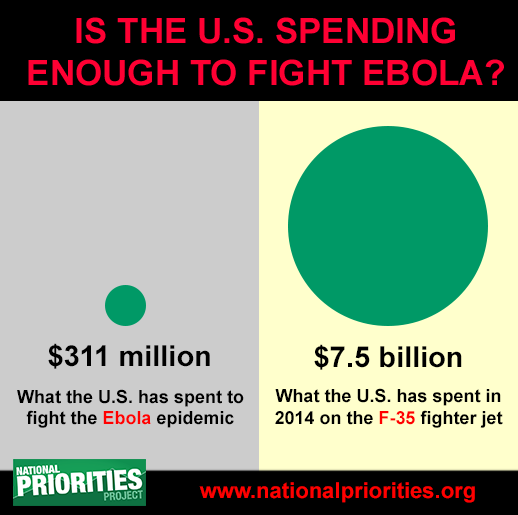 What has the U.S. spent fighting Ebola? It seems nobody really knows. One thing we do know: it’s not a lot.

According to the White House’s Office of Management and Budget (OMB), through October 10, the U.S. had spent about $311 million on domestic and international efforts to fight the recent Ebola outbreak, which happens to be the largest and deadliest outbreak in history.

Last month Congress approved $88 million in new funding for Ebola interventions, as requested by the White House.  That was in addition to $175 million that had already been obligated or transferred from other accounts.

So we’re pretty sure that $311 million doesn’t include any of the $88 million in additional funds.  But, we aren’t completely sure.

The White House’s Office of Management and Budget (OMB) isn’t either; a spokeswoman recently said that the funding was too difficult to track. Meanwhile, several congressional committees have transferred $750 million in funds intended for the war in Afghanistan that were never used to the Ebola fight.

In comparison, there is essentially a blank check for the U.S.’s controversial response to ISIS, the cost of which is nearing $1 billion by conservative estimates. And the Pentagon spent $7.5 billion in 2014 on the F-35 alone – a weapons system that has been riddled with problems since its inception.

So even if we aren’t sure how to add up funding spent on Ebola, there’s one thing we do know: It’s just a trickle of total federal spending.

P.S. NPP cares a lot about data transparency and the ability for you to track federal spending. Get our recent voter’s guide on the issue here.