Give Peace a Chance: What the Federal Budget Tells Us About the U.S. Response to ISIS and Iraq 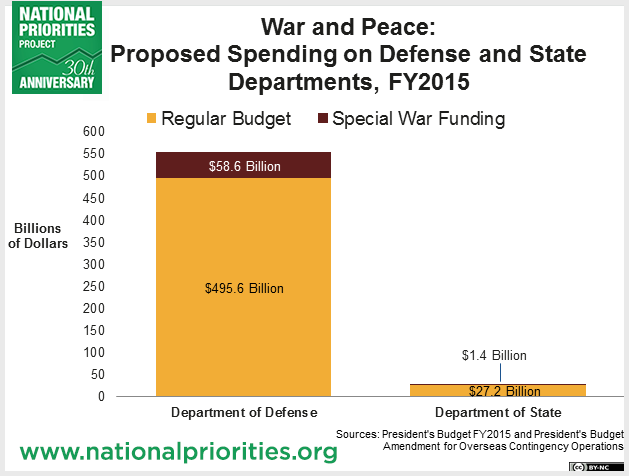 How will the United States choose to respond to instability in Iraq, where ISIS is at the center of renewed conflict? If the way we spend our federal dollars reflects our national priorities, the gaping chasm between the amount spent on defense and that spent funding the State Department–the primary federal agency responsible for diplomacy and international relations–speaks volumes.

On top of the $496 billion requested in regular Department of Defense funds for fiscal year 2015, the president’s amended budget for Overseas Contingency Operations (OCO)–otherwise known as the piggy bank for the Iraq and Afghanistan Wars – adds another $58.6 billion to the defense bank.

And how much for diplomacy? Well, the president’s OCO request puts aside another $1.4 billion for State, on top of the $27.2 billion he already requested.

For anyone who’s counting, that’s $19 dollars for the military for every $1 invested to achieve peace through diplomacy.  Let’s hope it’s not true that you get what you pay for.

« Planning a Fourth of July Road Trip? Not so fast: Our Highway Trust Fund is Going Broke

The United States Of America: Going Once, Twice, Sold! »