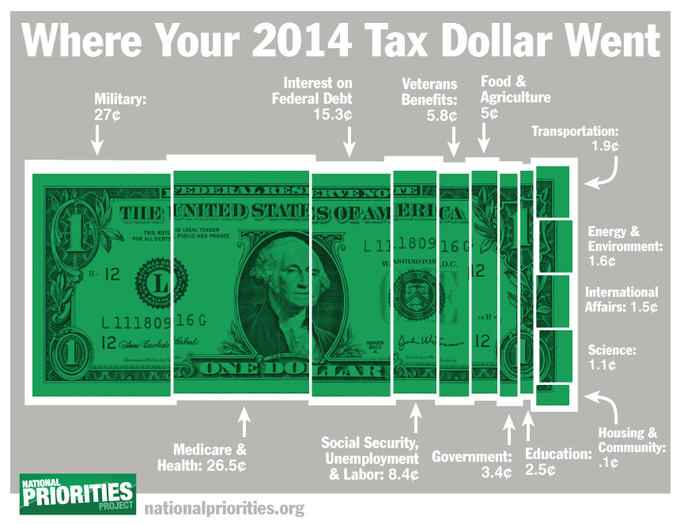 Tax day is upon us! The dollar graphic above shows how the federal government spent each one of your federal income dollars last year. But what else should you know about taxes? Here are seven things:

1. You are an investor in our nation and your tax dollars come back to your community.

Across the nation, 30 percent of state revenues come from the federal government. To see how federal money impacts your state, check out State Smart.

That’s right: Almost half of all federal revenues come from individual income taxes. That means regular people like you are the primary bill payer for the federal government – and why the federal budget belongs to you and to all Americans.

Check out our tax receipt to find out.

4. We don’t all pay taxes equally. Not even close.

In theory the tax code is progressive, meaning those who make more money pay higher tax rates – yet in practice that’s not always the case because the tax code is chock-full of tax breaks.

5. Our tax code is full of special tax breaks – tilted heavily in favor of the rich.

Ten of the largest tax breaks that together totaled more than $750 billion in lost tax revenue in 2013 overwhelmingly benefited the top 1 percent of households, with 17 percent of the benefits going to top earners. To learn more about tax breaks, check out our big money in tax breaks visualization.

The Earned Income Tax Credit (EITC) and the Child Tax Credit (CTC) are refundable, and are widely seen as effective anti-poverty measures, helping to combat inequality.

Lawmakers often use the tax code to achieve goals like promoting manufacturing or reducing the cost of health care. But the tax code isn’t always effective at achieving these kinds of goals. For example, lawmakers devote billions in spending to financial aid for college students, while a variety of tax breaks do the same thing. But while Pell grants and other direct aid are largely effective at reaching low-income students, tax breaks are far more likely to reach wealthy families who may be less in need of aid.

For more about these seven things, see our publication: Seven Things You Should Know About Taxes.

« Do You Know Where Your Taxes Go?